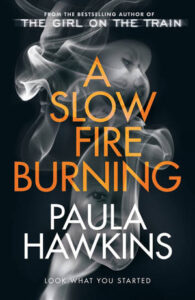 Today’s review is of A Slow Fire Burning by Paula Hawkins which will be published in hardback, eBook and audiobook on 31st August 2021. My thanks to Alison Barrow of Doubleday for the gorgeous proof copy of the book for review purposes.

‘What is wrong with you?’

Laura has spent most of her life being judged. She’s seen as hot-tempered, troubled, a loner. Some even call her dangerous.

Miriam knows that just because Laura is witnessed leaving the scene of a horrific murder with blood on her clothes, that doesn’t mean she’s a killer. Bitter experience has taught her how easy it is to get caught in the wrong place at the wrong time.

Carla is reeling from the brutal murder of her nephew. She trusts no one: good people are capable of terrible deeds. But how far will she go to find peace?

Innocent or guilty, everyone is damaged. Some are damaged enough to kill.

Look what you started. The slow fire burning of the title must surely be something that we all have within us to some degree. Those things that burn away at our very core over days, weeks, months, maybe years, and which threaten, with little warning, to ignite and take out all around them with their intense heat.

A Slow Fire Burning is a story of a tangled web of connections, some obvious and some not so. The map at the beginning shows where each major player lives and whilst there are men in this story, it’s very much about the women. Laura, Miriam and Carla. Each with their own cross to bear. Laura and Miriam’s traumas go back to their childhood, shocking events with far-reaching consequences. Carla’s life imploded in adulthood in the worst of ways. My favourite character was actually Irene, a woman who seemingly has a supporting part but is actually central to the story. A series of butterfly effects links them all and I thought Hawkins did a fantastic job of bringing them all together and then unveiling them one by one as I read this book.

I had no expectations about what this book was going to be. It’s not a fast-paced thriller, more of a gently simmering domestic noir which comes to the boil in quite unexpected ways. There’s a cleverness to the writing, a literary theme running through the story which I particularly enjoyed, and some aspects of the conclusion that I thought ingenious on the part of the author. There is an underlying tension to this ultimately dark story and a murder mystery at its heart. Whilst undoubtedly a slow burner, it always kept my attention with its intriguing and multi-layered characters and its twisty storyline.

PAULA HAWKINS worked as a journalist for fifteen years before turning her hand to fiction. Born and brought up in Zimbabwe, Paula moved to London in 1989 and has lived there ever since. Her first thriller, The Girl on the Train, has been a global phenomenon, selling 23 million copies worldwide. Published in over forty languages, it has been a No.1 bestseller around the world and was a No.1 box office hit film starring Emily Blunt.

Into the Water, her second stand-alone thriller, has also been a global No.1 bestseller, spending twenty weeks in the Sunday Times hardback fiction Top 10 bestseller list, and six weeks at No.1.

Paula’s latest thriller, A Slow Fire Burning, will be released on 31st August 2021.