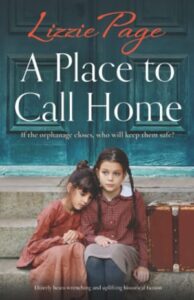 ShortBookandScribes #BookReview – A Place to Call Home by Lizzie Page

A Place to Call Home by Lizzie Page is the second in the Shilling Grange Children’s Home series of books published by Bookouture. It’s available now in paperback, eBook and audiobook. My thanks to the author for very kindly sending me a copy.

Shilling Grange Orphanage, England, 1949. She would do anything to protect the innocent children in her care. But soon they could be sent into danger…

When Clara Newton’s fiancé died during World War Two, she thought her life was over. But now she looks after orphans who, like her, lost everything during the war. Children like sweet little Peg who won’t speak, and Joyce whose body was scarred by polio. Clara loves them all dearly, even though life as a housemother can be lonely – especially now that Ivor, a D-Day war hero with dark brown eyes who once helped with the children, has disappeared…

But then Clara receives some terrible news. The orphanage is going to be sold and the children sent far away. Joyce and Peg will be taken to a notorious home for disabled children. The others will be sent to Australia, where Clara fears they will be mistreated by unknown families. Any day now, the children could lose everything she worked so hard to provide…

With wealthy buyers lined up to purchase Shilling Grange and a ship already docked waiting to carry the children away, Clara is desperate. She must find loving new homes for them quickly, but time is running out… Can she save the orphans before they lose everything all over again? And even if Ivor returns when she needs him the most, will it be too late?

A completely heart-wrenching and unforgettable historical novel, set after the devastation of World War Two. Perfect for fans of Before We Were Yours, Diney Costeloeand The Orphan Sisters. Clara Newton is the housemother of Shilling Grange Children’s Home. She had rather a shaky start in the position in book one of this series, The Orphanage, but in this second instalment she’s more sure of herself and what the children in her care need from her. However, bad news is on the horizon and when she learns that the home is to be sold and the children scattered far and wide (Australia no less!) she must try to find them the homes they have been looking for before it’s too late.

She’s also dealing with matters of the heart. The man she fell for in book one has done a disappearing act. Can anyone else live up to him?

A Place to Call Home is another lovely read with writing that just kept pulling me along and characters that were calling out to me to give them my attention. Clara is brilliant. She’s a bit wobbly at times but always manages to save the day one way or another. The children themselves have had their characters built up incredibly well by Lizzie Page, each of them unique and special, and I was rooting for them and Clara to find a solution to the situation they found themselves in.

I do adore Lizzie Page’s writing. I think it’s the inimitable mixture of dry humour, heartbreaking sorrow and stories that seem relatable yet distinctive that makes me love them so much. I’m now really keen to read book three, An Orphan’s Song, and see what’s next for Clara and her brood. A Place to Call Home proved that there’s plenty of life left in the tales of the Shilling Grange gang.