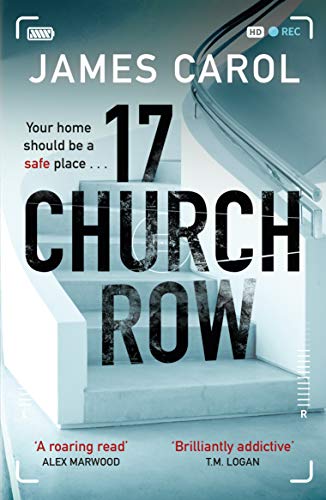 I’m so pleased to be reviewing this fabulous twisty read today. My thanks to Zaffre for the finished copy of the book for review purposes and to Tracy Fenton of Compulsive Readers for the place on the tour.

For fans of J. P. Delaney’s The Girl Before comes a thriller that makes us question the lengths we would go to, to keep our family safe.

Three years ago, Nikki and Ethan Rhodes suffered a devastating loss when their four-year-old daughter Grace was tragically killed in a road accident. Ethan, a radio personality, escapes into work, leaving Nikki to care for their remaining child, Bella, who hasn’t spoken since that day.

Seeking a fresh start, the family moves into a revolutionary new house designed by renowned architect, Catriona Fisher. The house features a state-of-the-art security system, along with every amenity you could dream of.

For the Rhodes’ this is a chance to finally pick up the pieces and get on with their lives in a place where they feel totally safe.

But what if 17 Church Row isn’t the safe haven that they think it is?

Good grief, remind me never to buy a house with built in AI!

That’s what Nikki and Ethan do, with their seven year old daughter, Bella. They’re trying to recover from the nightmare of losing Bella’s twin, Grace, in an accident a couple of years earlier and moving house is one way of trying to deal with that. From a common or garden home they move to 17 Church Row, a house where the doors have no handles, everything is automated and most importantly there’s Alice. Alice is probably the most sophisticated piece of artificial intelligence you could find. She is intuitive and helpful and the family start to rely on her completely.

This is where things start to go a bit awry. I won’t go into what happens but it’s a stark lesson in the possibilities of computers and what they are capable of. I don’t know whether the things that happened in the book could actually happen but I suspect there’s much in this book that is possible with the right components and processing power.

It’s an intense and exciting storyline, and I thought it was inspired too. These are our modern day nightmares, the idea that computers can turn on us. I’m all for technology but I think I would draw the line at something that did everything for me. It can never be good to give over all control to anybody or anything, can it?

I thought 17 Church Row was a really well plotted story with a twist in the middle that I didn’t guess at all. This is very much a plot-driven story rather than a character one (unless you include Alice as she’s very much the driving force in this book). I couldn’t turn the pages quickly enough whilst reading this dark and clever story. James Carol is the bestselling author of BROKEN DOLLS, the first in a series featuring former FBI profiler Jefferson Winter. The novel was released in the UK in January 2014 to rave reviews and reached number 1 on the Amazon fiction and thriller charts. In addition James is writing a series of eBooks set during Winter’s FBI days. PRESUMED GUILTY is the first of these. Under the pseudonym J.S. Carol, he has also written a number of standalones. KISS ME KILL ME is the latest.

James was born in Scotland and moved to England in the early-eighties. At various times he has worked as a guitarist, sound engineer, guitar tutor, journalist, and a horse riding instructor. When he’s not writing, James can usually be found in a pair of headphones writing and recording music. He lives in Hertfordshire with his wife and two children.