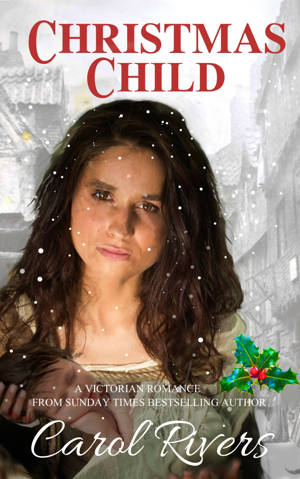 Welcome to my stop on the blog tour for Christmas Child by Carol Rivers. I have a guest post by Carol to share with you which, coincidentally, is about one of my favourite subjects at the moment: Downton Abbey! There’s also a chance to win five paperbacks! My thanks to Rachel Gilbey from Rachel’s Random Resources for the place on the tour.

The 2019 Victorian romance from the Sunday Times bestselling author.

A perfect Dickensian saga for Christmas.

Christmas Day, London 1880. Snow falls … a dying Irish girl clutching her new-born baby drags herself to the sanctuary of an East End orphanage and throws herself on the mercy of the Sisters of Clemency. The nuns raise little Ettie O’Reilly as their own, but the lives of the nuns and orphans are soon crushed by an unscrupulous bishop. The heart-breaking outcome turns Ettie’s life upside down and Christmas will never mean the same again.

Will Ettie ever find her friend Michael Wilson whose secret holds the key to their past? Will Ettie keep her innocence and survive the traumatic events that are about to erupt?

Downton Abbey, Above and Below Stairs by Carol Rivers Most people are fascinated by a good costume drama including me. And so I have incorporated a “Downton Abbey” theme into my latest saga, to be published with Amazon 23rd September and titled “Christmas Child.”

I have loved writing this 19th century story and so I thought you would like a peep through the keyhole of our much beloved Downton Abbey, real name Highclere Castle in Newbury, and discover, as I did, some less-known facts about the series.

Highclere Castle has been used as background for many media productions, but Downton Abbey is the longest running series and gives an “upstairs downstairs” view of the fictional household of that era. It has been mooted that the cast loved all the trappings of the drama and thought it very much like a “soap opera with attitude.” Well, coming from my East End background that suits me fine!

Did you know when making the series they built the attic rooms and kitchen separately at Ealing, just outside of London? The actors said they were always petrified of dropping things or knocking vases over when they were filming at Highclere, but could relax more in the studios.

The large black cooking stove that held pride of place in the kitchen was made completely of wood, and a substance was put into the kettle and pots to make it look as if they were steaming while being stone cold.

Caroline McCall, the assistant costume designer lets us into another secret.  The upstairs actors would have to change apparel three times in a day to create authenticity and the ladies would have to wear real corsets. When the cast were seated at table for meals, the scenes took up to twelve hours to shoot, which could have done nothing for their digestion!

Interestingly, the TV series of Downton Abbey was not an adaption, but written by Julian Fellowes specifically for television with just the actors in mind.

Director Brian Percival, describes his shooting techniques thus; above stairs the camera action is slow and the actors move stately, everything is more serene. Downstairs, the cameras move fast in order to keep up with the cast – more hustle than bustle!

Hair and make-up designer, Anne “Nosh” Oldham, reveals that the cosmetic research was taken from Paris fashions, a soft, fluid period in history when the young aristocracy would follow their favourites much like celebrity is emulated today. Face powders and perfume were high on the list and the actors would be made-up in a way that suited their unique bone structure and the on-set lighting.

With all this in mind, I centred my research on the late 19th century and gave a raft of opportunities to my spirited but unworldly heroine, thirteen-year-old Ettie O’Reilly. From birth as an orphan in London’s East End to her journey into adulthood and a very different society, I was surprised, saddened, uplifted and inspired as I wrote her story – and I sincerely hope “Christmas Child” will do the very same for you.

With all my love as always, Carol xx

Fascinating post, thank you, Carol. I am a recent convert to Downton Abbey but I absolutely love it.

(Open to UK Only) “Were there’s muck there’s money!” If my family had a royal crest I’m sure those are the words that would have been hewn into the stone above it.

Mum and Dad were both East Enders who were born on the famous or should I say the then infamous Isle of Dogs. They were costermongers selling fruit, veg and anything else that would stand still long enough!

Their family were immigrants who travelled to the UK from Ireland and France, while others emigrated to America.

As a child I would listen to the adults spinning their colourful stories, as my cousins and I drank pop under the table.

I know the seeds of all my stories come from those far off times that feel like only yesterday. So I would like to say a big heartfelt thank you to all my family and ancestors wherever you are now … UK, Ireland, France or America, as you’ve handed down to me the magic and love of story telling.