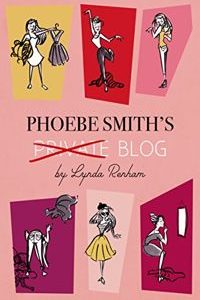 Meet Phoebe Smith. Her boyfriend has just dumped her for Essex Earring (Riyana to her friends) and she needs a date for the works do at the Guildhall in six weeks. In between gorging on Besties pork pies, her friends encourage her to set up a private blog (for her eyes only, you understand), to document her disastrous attempts at finding a man. Added to her woes is the worry of losing her flat to Bloom Properties. Harry Bloom lives in the flat next door and works for his father in the family business. He’s the enemy so why is Phoebe so drawn to him?

This is such a fun and entertaining read. I loved Lynda Renham’s humour and her writing style and I often found myself sniggering, particularly about the very odd men that Phoebe seems to end up dating. She lurches from disaster to disaster with no let up but she’s a very endearing character and I think a lovely friend to have. The supporting characters are great too, particularly Harry, who is one of the few men in the book who is not just plain weird.

There are inevitable comparisons with Bridget Jones’s Diary here with the group of friends, the mess of a love life and the recording of it in some kind of diary format. It’s a long time since I read Bridget but I have to say I don’t remember laughing as much at her as I did at Phoebe. There aren’t that many books that make me laugh out loud but this one did. The author has a wickedly funny imagination to think up all the different scenarios and characterisations.

Having a blog feature in the book makes it a very current read and I liked that. In fact it was one of the things that drew me immediately to the book, along with the lovely cover. Having now delved into Phoebe’s life I came out the other side feeling really satisfied.

This is a fantastic comedy romance and I do think this one stands out in the genre.

With thanks to the author and Raucous Publishing for the review copy.  The ebook of Phoebe Smith’s Private Blog is out now.

I asked Lynda about her inspiration for the character of Phoebe and for the idea of having a blog as part of the story.

I’m delighted to be on Short Book and Scribes blog today and thrilled that ‘Phoebe Smith’s Private Blog’ is being reviewed. I think ‘Phoebe Smith’ is my favourite comedy to date. I love the characters and very much enjoyed writing this book. So much so, that I am even considering a sequel in the future.

I decided to write ‘Phoebe Smith’ several years ago when a friend asked why I hadn’t featured Tinder in my novels. I knew nothing about Tinder and I have to admit discovering it was quite an eye opener. I wanted Phoebe to be a thirty something female who didn’t really want to care about having a boyfriend but then … Along comes the big office party to celebrate Nigel Taylor-Lynworth becoming her new boss. After being dumped by her boyfriend just before New Year, the last thing she needs is for people to think she can’t get a man. So, Phoebe goes all out to find a date for the works do. This includes blind dates, Tinder dates and more.

I think it is my funniest novel to date. I started it with the idea of a young woman trying to get a date and then it led to the blog postings which much later in the novel become catastrophic for her.

If you want to give this fabulous book a go then it’s currently a steal at 99p for the ebook. Lynda has a number of other ebooks available including A Christmas Romance which is also 99p. Lynda Renham is famous for her romantic comedy novels. She has been called A Comedian in a Book, Chicklit Royalty and A Comic Genius. Her writing style has been likened to Sophie Kinsella but is refreshingly down to earth with characters that become your friends. Lynda is a prolific writer, blogger and when not writing can usually be found wasting her time on Facebook.

Lynda lives in Oxfordshire with her second husband and cat. Her web page is www.renham.co.uk and she can be found on Twitter @lyndarenham.