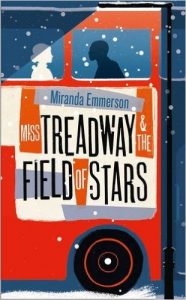 #bookreview Miss Treadway and the Field of Stars by Miranda Emmerson

This book turned out to be not what I was expecting at all.  I think I had in mind a jolly 60s caper (partly because of the lovely cover) and what I actually got was a serious story about racism and family problems amongst other things.

There’s a lot going on in this story and quite a few different strands.  The disappearance of Iolanthe Green, the missing actress, is what the story revolves around and yet in a way the focus was on everybody but her.  We meet policeman Barnaby Hayes and he features a fair amount in the story, but I was left wondering what the point of him being such a main character was, and the conclusion to his story was sadly lacking.

The ending was extremely abrupt and I kept pressing the button on my Kindle thinking that there must be more.  I couldn’t even remember who the final character mentioned was and had to go back and search through the book.  Even then, I’m not sure what the relevance of mentioning them was.

I liked many aspects of this book.  I liked Anna Treadway and I particularly liked her gentle and kind friend, Aloysius.  Theirs were the sections of the story that stood out for me.  Whilst there isn’t a major 60s feel to it, I did enjoy reading about the places that they visited whilst searching for Iolanthe.  I thought the prejudices of the period were portrayed quite well and there were some sections that were very uncomfortable and shocking to read.

This is a hard book for me to review.  I did feel that all the strands didn’t quite come together.  The author is a lovely writer but maybe the level of detail and the number of characters was too much for me.  I do think the book will be a success though and Miranda Emmerson has a fine way with words.

Thank you to the publishers and Netgalley for the review copy.  Miss Treadway and the Field of Stars is published on 12th January 2017 by Fourth Estate.