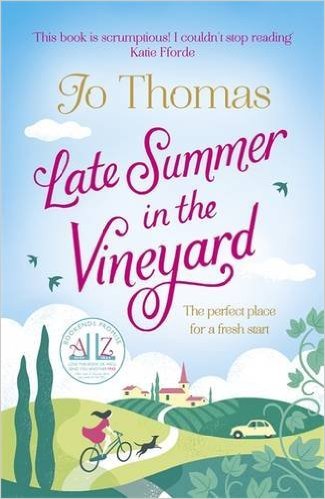 Late Summer in the Vineyard by Jo Thomas

Emmy Bridges works at a call centre dealing with sales, lives with her dad and lives a pretty dull life. She feels responsible for her dad who hasn’t gone out since her mum died years earlier and when he gets into trouble with the mortgage on their house she ends up taking an assignment in south-west France at a vineyard, learning how to sell the wine when she returns home. She becomes involved with Madame Beaumont, an elderly local vintner, who likes to do things her own way and things snowball until Emmy finds herself completely embroiled in wine-making. Add to the mix the charming Charlie and the infuriating Isaac and all the ingredients are there for a good romantic novel.

I thought this book got off to a slow start and was a little frustrated by the repeated descriptions of Emmy’s pear-shaped hips and cut-off jeans (for example) but it grew on me and I ended up loving it. Emmy was a character who let people walk all over her but she came into her own as the story progressed and I rooted for her to get everything she wanted by the end of it. It’s quite a long book, but having finished it I sort of feel a bit lost without it. It’s a truly charming story and the author has obviously done lots of research (which must have been terrible for her!) as there’s so much detail about wine-making from the vine to the bottle.

The setting is wonderful and beautifully described. I could just imagine the house and the landscape that Emmy looks out on. I’m looking forward to reading more of Jo Thomas’s work – I’ve got a feeling I will like them.

With thanks to the publishers and Amazon Vine for the review copy.  Late Summer in the Vineyard was published on 11th August 2016 by Headline Review.