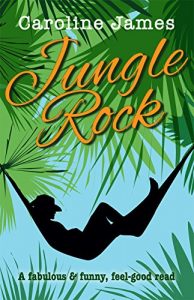 Handsome young chef Zach Docherty is feeling the heat. Following an exposé in a national newspaper, his fiancée Poppy Dunlop has broken their engagement. Heartbroken at the thought of life without Poppy, Zach drowns his sorrows and, when his agent suggests that Zach becomes a contestant in a reality TV show, Jungle Survival, he reluctantly agrees. Plunged deep in the jungle, into a bizarre mix of talent and trials, Zach meets glamour model Cleo Petra, and the cameras go crazy.
Will Zach survive and be crowned Jungle King? Or will his latest exploits push Poppy further away…

Caroline James is a new author for me but I found this novella to be a lovely taster of her work.  We follow Zach, aka The Gypsy Chef, as he enters the Australian jungle for popular show, Jungle Survival (based, obviously, on I’m A Celebrity).  There’s also his ex-girlfriend, Poppy, his agent, Bob, and his mum and godmother, Jo and Hattie, who run Boomerville, a hotel for the over fifties back home in the Lake District.  I loved reading about all of these characters.

This was a charming read.  I liked Zach a lot and found myself rooting for him.  It’s a feel-good story with lots of fun and although I no longer watch the programme it’s based on, the setting is instantly recognisable and as it’s set at this time of year it also has a nice festive feel to it.  I understand that the characters pop up in the author’s previous works and also her next book, Boomerville which will be published in 2017, but Jungle Rock can be read as a standalone book.

I thought this was a well written novella with an interesting and current setting.  It’s a lovely short read, but jam-packed with entertaining goings-on.

With thanks to Caroline James for the review copy.  Jungle Rock was released on 21st November 2016 by Ramjam Publishing Caroline’s debut novel, Coffee Tea The Gypsy & Me shot to #3 on Amazon and was E-book of the Week in The Sun newspaper. Her second novel, So, You Think You’re A Celebrity… Chef? has been described as wickedly funny: ‘AbFab meets MasterChef in a Soap…’ Coffee Tea The Caribbean & Me, an Amazon best-seller, was a Top Ten Finalist at The Write Stuff, London Book Fair 2015 and the judge’s comments included: Caroline is a natural story-teller with a gift for humour in her writing.” Her next novel, Boomerville will be published spring 2017.

Caroline has owned and run many catering related businesses and cookery is a passion alongside her writing, combining the two with her love of the hospitality industry and romantic fiction. As a media agent, Caroline represented many well-known celebrity chefs and her TV script, So, You Think You’re A Celebrity Chef? was runner up at the Winchester Writers Festival 2016.

She has published short stories and is a member of the Romantic Novelist’s Association. Caroline writes articles on food and celebrity based interviews and is Feature Editor for an online lifestyle magazine. She is a founder member of The Cheshirati and is available for inspiring and entertaining talks on anything related to the hospitality and publishing industry.