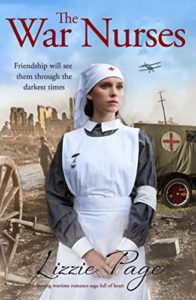 I’m delighted to be reviewing The War Nurses today as part of the blog tour. Thank you to Kim Nash from Bookouture for the place on the tour and for the review copy via Netgalley.

As war takes its toll, the love and care of two brave young nurses will become everything to the wounded soldiers they tend.

1914 – Two young nurses pledge to help the war effort: Mairi, a wholesome idealist hoping to leave behind her past and Elsie, a glamorous single mother with a weakness for handsome soldiers. Despite their differences, the pair become firm friends.

At the emergency medical shelter where they’re based, Elsie and Mairi work around the clock to treat wounded soldiers. It’s heart-breaking work and they are at constant risk from shelling, fire and disease. But there are also happier times… parties, trips and letters. And maybe even the possibility of love with an attractive officer in their care…

A powerfully moving wartime saga – you won’t want to put it down!

I was immediately drawn to this book when I first heard about it. The title alone sounded right up my street and then, when I read the blurb, I was sold! I have to say that, whilst I love the cover, that starched, perfectly white uniform does not fit with what I read in the story at all. Elsie and Mairi outside the cellar

The story is one of sacrifice, muck, hunger, death and war. It’s the story of two incredible and brave women, Elsie Knocker and Mairi Chisholm. They were recruited to the Flying Ambulance Corps during World War One and sent to Belgium to help with the nursing of injured and dying men. But they felt that being in a hospital an hour away from the action wasn’t helping survival rates so set up in a cellar much closer to the action. The incredible thing about this story is that these women really existed. They really made these amazing decisions and helped so many men in the process. Elsie and Mairi in their Wolseley ambulance

I wouldn’t call it a typical saga. To me, that is a book that has triumph against the odds with a heartwarming ending. The War Nurses is much grittier and happy endings are not in abundance. I always think that authors are constrained when fictionalising real life events and I did see this a little here, but Lizzie Page has done an amazing job at breathing life into two characters who ought to be better known for their fearless and heroic acts. I loved the fact that they were picked for the Flying Ambulance Corps because they were accomplished motorcyclists, trail-blazers even before the war took over.

Mairi is the narrator of the story and I felt for her throughout as she seemed to constantly be in the shadow of the gregarious Elsie. Two more different women couldn’t have been thrown together and yet, for the most part, they worked together in harmony, dealing with some of the most horrendous things life could deal them. It’s an incredible story and I was hooked by it from beginning to end. I’m really looking forward to Page’s next book in the trilogy about amazing women who served on the Western Front. If it’s as good as this one then I’m in for a treat. Lizzie Page has always loved reading the adventures of women in the past so it seemed natural to write historical fiction. The War Nurses is the first in a trilogy inspired by some of the incredible women who served on the Western Front. She likes to think its a ‘fierce-friendship-story’ and hopes the series helps shine a light on the achievements and relationships of women in war, and that you find all the books entertaining and moving.