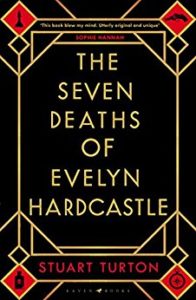 Posted on 8th February 2018 By Nicola

Today I’m reviewing The Seven Deaths of Evelyn Hardcastle by Stuart Turton which is published today. Happy publication day, Stuart! I’d like to thank Raven Books for giving me the opportunity to review this book via Netgalley.

‘Somebody’s going to be murdered at the ball tonight. It won’t appear to be a murder and so the murderer won’t be caught. Rectify that injustice and I’ll show you the way out.’

It is meant to be a celebration but it ends in tragedy. As fireworks explode overhead, Evelyn Hardcastle, the young and beautiful daughter of the house, is killed.

But Evelyn will not die just once. Until Aiden – one of the guests summoned to Blackheath for the party – can solve her murder, the day will repeat itself, over and over again. Every time ending with the fateful pistol shot.

The only way to break this cycle is to identify the killer. But each time the day begins again, Aiden wakes in the body of a different guest. And someone is determined to prevent him ever escaping Blackheath…

You can buy the book now in ebook and hardback.

Well. I hardly know where to start or how to review this novel. It’s complex, exciting and a little bit mind-blowing.

I also don’t want to give anything away as to do so would spoil this book completely so I’m going to have to be quite careful here.

We first meet Aiden Bishop at Blackheath, a faded country house. I don’t remember if the year is mentioned at all but I would say late 1920s/early 1930s. There’s a ball going on with a number of guests who have been there before. The cast of characters is quite large and each one is unlikeable in various degrees and utterly crucial to the story. In fact, more than one of them may be hosting Aiden as he hops from body to body, living the same day over and over, in an attempt to work out who kills Evelyn Hardcastle, daughter of the house, at the ball.

I confess now, this is one of those books that I find absolutely fascinating, but that I don’t wholly understand. The author must have spent ages plotting the whole thing and what I loved most of all about reading it were those moments of dawning realisation, those bits where Aiden set something up which made little sense, only for it to become clear why he did it when he’s living the day again in another host. Just brilliant!

The setting is perfect and wouldn’t really work as well in any other time period. These were the heady days of big country house parties, faded grandeur, the spectre of war still hanging over it all. This is a traditional crime novel in many ways, but then totally turned on its head, put in a bag and shaken up!

My one regret is that I read an e-copy of the book which made it a lot harder to skip back and try and put the clues together. But, despite this being a pretty big book at 528 pages, I raced through it. Just when I thought I was getting close to knowing who killed Evelyn, a curve-ball was thrown at me and there was another piece of the puzzle to slot into place.

The Seven Deaths of Evelyn Hardcastle is such a clever and cunning book. I can’t imagine how the author ever managed to make it work but he certainly did. This is going to be a popular book (and possibly a Marmite one too). This reader was certainly thrilled by it. Stuart Turton is a freelance travel journalist who has previously worked in Shanghai and Dubai. The Seven Deaths of Evelyn Hardcastle is his debut novel. He is the winner of the Brighton and Hove Short Story Prize and was longlisted for the BBC Radio 4 Opening Lines competition. He lives in West London with his wife.