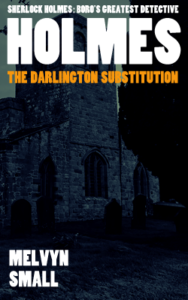 I’m delighted to welcome you to my stop on the blog tour for The Darlington Substitution by Melvyn Small. I’d like to thank Mel for asking me to take part. I’m reviewing the book further down this post but first, let’s see what this novella is about.

The Darlington Substitution is going to be serialised as 12 weekly postings on Indipenned.com, the home of independent literature. It’s a platform that has been created to champion the work of independent authors and connect them with discerning readers looking to put something a little bit different on their bookshelves.

I must admit I had no idea what to expect from this novella. I’ve never read any of the Sherlock Holmes stories, although I do know a bit about the character (who doesn’t?). I enjoyed some of the most recent TV adaption and that may have been because it had a modern setting and style to it.

So I was keen to try The Darlington Substitution by Melvyn Small. From what I can gather, Small has taken the title of a case from the casebook of Sherlock Holmes and rewritten the story. I have to say that I absolutely loved it. The Darlington of the title is a radio DJ who is interviewing Dr Watson about his book of Sherlock Holmes cases, but when the interview is not only not aired, but completely deleted, Watson is piqued and Holmes is on a mission to find out why the interview was scrapped.

I read this novella really quickly, partly because it’s short and partly because it’s so good. It completely exceeded my expectations and it frequently made me smile or laugh. It’s got a lot of dry humour in it and I loved the many modern and down to earth touches which bring Holmes and Watson right up to date.

It’s great fun and an appealing story, with a well-written take on some very well-known characters. Loved it! Melvyn Small is an author and the founder of Indipenned, a website that champions the work of independent literature. Thus far he has written two books, Holmes Volume 1 and the imaginatively titled follow up Holmes Volume 2 (Subsequently republished by Fahrenheit Press as the Victor Locke Chronicles)

Mel’s perhaps unique spin on Sherlock Holmes, which places the character in a different time, location and section of society, has found fans around the world and is fast becoming a cult classic.  His writing style is pacey and littered with gin-dry humour. It has been described as “hilarious, clever and hugely enjoyable.”  The Darlington Substitution novella is his longest story so far and perhaps his best work to date.