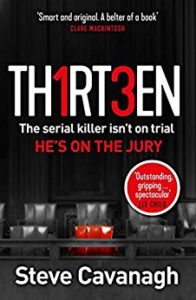 I’m excited to be a part of the blog tour for TH1RT3EN by Steve Cavanagh today. It’s such a unique and clever thriller and my review is further down this post. I’d like to thank Lauren Woosey from Orion for the review copy via Netgalley and Tracy Fenton from TBC on Facebook for the place on the tour.

If I was ever to be accused of a crime I’d want Eddie Flynn to represent me. Wow! He’s an amazing lawyer, thinking of things that nobody else thinks of. But then he has to be one step ahead when there’s the most twisted, most cunning serial killer on the loose.

This is my first Steve Cavanagh book, but it’s the fourth Eddie Flynn book. However, I had no problem at all reading it as a standalone as any relevant background information is fed into the story seamlessly.

So, Eddie Flynn finds himself defending Hollywood rising star, Bobby Solomon, who is accused of the murder of his wife and their security man. Eddie is a lawyer with integrity and no way would he defend somebody he thought was guilty. So he’s happy to take on the case. So far so good. Except, as the tagline suggests, there’s a serial killer on the jury, taking the best seat in the house to watch all his plans come to fruition. And this particular serial killer is one of the best I have come across.

The plotting in this book is amazing. The first half of the book is great but the second half was on fire and absolutely thrilled me. I almost want to go back and read it again to be able to take it all in properly. Also, the characterisations are excellent. I thought Eddie was perfect. He’s likeable, smart and, as a former conman, he knows all the tricks in the book. And then there’s Joshua Kane, said serial killer. Now he is one sick creation, but a fantastic one nevertheless.

I really don’t know how Cavanagh managed to come up with such an intense, intricately woven tale but that’s exactly what it is. Th1rt3en is an extraordinarily clever story, somewhat incredible perhaps, but not so much so that it lost plausibility. It’s fast-paced, exciting and full of clever twists. It really is a gripping crime thriller with non-stop action and a fabulously clever hook. I loved it. Steve Cavanagh is a critically acclaimed, award-winning author and lawyer. He is also one half of the Two Crime Writers and a Microphone podcast. His latest novel, Thirteen, is out in ebook now and paperback in June.