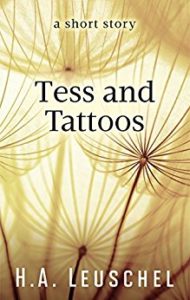 I’m so pleased to be posting today as part of the blog blitz for Tess and Tattoos, a short story by H.A. Leuschel. I’m sharing my review and also have details of a giveaway, but first, shall we find out what Tess and Tattoos is about?

This is a short story of around 61 pages, but it actually had quite a lot going on in it. Tess is an elderly lady and Sandra is a carer in the care home where Tess lives. Tess is quite proud and keeps herself to herself until one day something happens that puts Tess a bit more into the minds of the people at the home.

I thought Tess was a brave and strong lady and I liked Sandra very much. She’d been through a lot and had found a kindred spirit in Tess, despite the large age gap. I had a bit of a dawning realisation of what might have happened to Tess and I turned out to be right. It’s quite a shocking storyline and also quite a moving one.

If I’m honest, short stories are not generally my thing as I feel they often lack the depth of characterisations and story that I need. But this was an accomplished and well rounded story and a good example of the genre. It’s one of the stories in H.A. Leuschel’s Manipulated Lives and there is a theme of manipulation in Tess and Tattoos.

This is a story with depth and interesting characters, and it’s very well-written and poignant. Helene Andrea Leuschel grew up in Belgium where she gained a Licentiate in Journalism & Communication, which led to a career in radio and television in Brussels, London and Edinburgh. She now lives with her husband and two children in Portugal and recently acquired a Master of Philosophy with the OU, deepening her passion for the study of the mind. When she is not writing, Helene works as a freelance journalist and teaches Yoga.