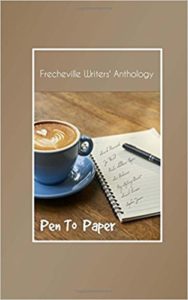 Today, I’m reviewing a book that is a bit special because it’s a writing anthology by the writing group at my local library. Frecheville Library in Sheffield is volunteer run and done so very professionally. Before my son went to nursery, I used to go to the Babytime session every Monday and it felt really good to be supporting the library, even in a small way.

There are so many stories in here. Some true, some conjured up by vivid imaginations and others that can be anything you want them to be… A collection of stories and poems from the Frecheville Library Writers’ Group covering everything from romance and drama to sci-fi and comedy. All proceeds from the sale of this book will go to Frecheville Library and Learning Centre, which is completely run by volunteers.

You can get a paperback copy of Pen to Paper here.

Pen to Paper is an anthology of short stories from members of a writing group based at my local library. The library is one of a number in Sheffield that are now volunteer run – it was either that or be closed by the council – and it seems to be thriving. Proceeds from the sale of the anthology will help to keep the library going in the future.

I am the first to admit that I am not always a huge fan of short stories but I have to say that there are some really great ones in Pen to Paper. Each writer has their own introduction and then between one and four pieces of their work are showcased.

Each of the pieces is well-written and deserving of their place in the book. It all kicks off with A Work of Fiction, which I thought was a perfect start and a cleverly written story about a woman who works in a library – very apt!

One or two others that stood out for me were 5 Minutes, a very moving story about a woman’s life from leaving home to get married, and Yesterday, which was a one page piece about having a teenager. Also Reflecting for a Grandson’s Project, which was a lovely collection of memories about growing up in Sheffield.

But really, there’s something for everyone here, from modern to historical, moving accounts to tales of revenge. You don’t need to be from Sheffield to appreciate Pen to Paper. This collection will appeal to anyone who enjoys the short story.