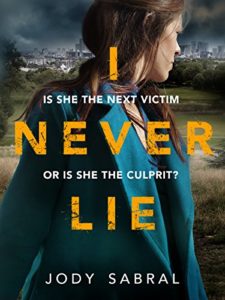 Today’s review is for I Never Lie by Jody Sabral. This book caught my eye on The Pigeonhole, a site where a section, or stave, of a book is sent to you by email every day. I wasn’t at all sure that reading a book piecemeal like that would suit me but I’m glad to say that it did, and it enabled me to have two books on the go at once, again something I never normally do. I’d like to thank the publishers, Canelo, and The Pigeonhole for the opportunity to read I Never Lie.

Is she the next victim? Or is she the culprit…?

Alex South is a high-functioning alcoholic who is teetering on the brink of oblivion. Her career as a television journalist is hanging by a thread since a drunken on-air rant. When a series of murders occur within a couple of miles of her East London home she is given another chance to prove her skill and report the unfolding events. She thinks she can control the drinking, but soon she finds gaping holes in her memory, and wakes to find she’s done things she can’t recall. As the story she’s covering starts to creep into her own life, is Alex a danger only to herself – or to others?

I Never Lie is available now as an ebook.

I’ve said it before: I love an unreliable narrator. And we have one here in Alex South. She’s a journalist and an alcoholic in denial. Having moved to London from Manchester after splitting with her boyfriend, she’s forged forward with a new career as a TV news reporter and finds herself reporting on the murders of women occurring very near to her home.

I found Alex to be a compelling character to follow. She’s telling her own story and because of this it’s hard to know if she is being honest with both herself and with the reader. Her attitude towards her need to drink seems to me to be very realistic. She knows how much she needs to drink but can’t accept she has a very serious issue. She’s clinging on to her job, her life and her sanity by the skin of her teeth.

Alongside Alex’s narrative are diary entries from another person. As this person is not mentioned in the blurb I won’t mention them either, but whilst Alex’s sections were definitely my favourite parts, I think the diary entries added an extra dimension to the story and filled in some of the blanks from Alex’s story.

As more murders take place and Alex knows she is blacking out, it’s quite exciting to try and work out who the killer might be, if Alex has any role in it at all and what is going to happen at the end. This is not really a book about the murders though, it’s a book about addiction, about lying (Alex continually lies to herself and to everybody else) and searching for the truth. I have to say I found the ending a tiny bit of a disappointment compared to the rest of the book and I was really hoping for something a bit more unexpected (probably because of the tagline talking about the gripping plot twist I wouldn’t see coming!). Don’t get me wrong, there was nothing at all wrong with the end, just I thought it was building up to something more illuminating.

Overall, I found I Never Lie to be an excellent psychological thriller. I’d definitely read another book by Jody Sabral as I was gripped by it all the way through. Jody Sabral is based between the South Coast and London, where she works as a Foreign Desk editor and video producer at the BBC. She is a graduate of the MA in Crime Fiction at City University, London. Jody worked as a journalist in Turkey for ten years, covering the region for various international broadcasters. She self-published her first book Changing Borders in 2012 and won the CWA Debut Dagger in 2014 for her second novel The Movement. In addition to working for the BBC, Jody also writes for the Huffington Post, Al–Monitor and Brics Post.