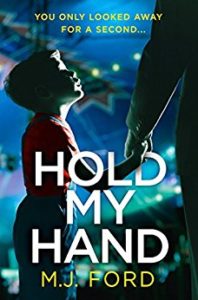 I’m delighted to welcome you to my stop on the blog tour for Hold My Hand by M.J. Ford. I’d like to thank Sabah Khan from Avon Books for the place on the tour and the review copy.

I’m reviewing this fabulous read today but first, here’s what it’s all about.

How long do you hunt for the missing?

When a young Josie Masters sees a boy wearing a red football shirt, Dylan Jones, being taken by a clown at a carnival, she tries to alert the crowds. But it’s too late. Dylan has disappeared…

Thirty years later, Josie is working as a police officer in Bath. The remains of the body of a child have been found – complete with tatters of a torn red football shirt. Is it the boy she saw vanish in the clutches of the clown? Or is it someone else altogether?

And then another child disappears…

You can get the ebook now for a mere 99p and it’s also available in paperback.

Well, Hold My Hand, is a very clever crime novel. I didn’t realise from the blurb that it was quite as much of a police procedural as it was. The child being led from a fair by a clown sounded very sinister and I was expecting something a bit more scary. That’s not to say that this is not a hard-hitting, gritty story as it absolutely is that, and I loved every minute I spent reading it.

Jo Masters, as a child, witnessed Dylan Jones being taken from the fair. Thirty years on, she happens to be on duty as a police officer when a body, possibly Dylan’s, turns up. And then, when another child goes missing, she wonders if this is the chance to put away a child abductor or murderer for good.

Jo is a feisty and impetuous police officer, but a good one. There’s stuff going on in her personal life but it doesn’t affect her ability to do her job well. I enjoyed her interactions with other officers and the way she went about her investigations.

Though this is primarily a police procedural, it’s far more than that and it’s a lot more intense than just a police officer investigating a crime. It’s got guts, it’s got twists and turns galore, and it’s extremely well-written. After a little bit of getting to know the characters and the story, I just raced through it.

The ending truly is shocking and chilling and, I have to say, totally unexpected. I thought it was quite a genius bit of plot work to weave it into the story so well, with so many red herrings to throw me off the scent.

I found Hold My Hand to be a fantastic read. I wonder if we will see more of Jo. I feel she has a lot more to tell us and a lot more to give and so I hope that M.J. Ford will give her another outing. M. J. Ford is a writer and an editor at Working Partners, where he works on projects across the age groups. He loves thrillers, historical and fantasy titles. Hold My Hand is his debut novel.