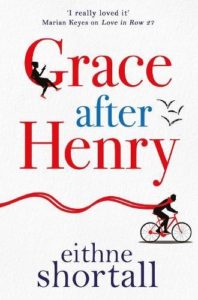 My thanks to Anne Cater of Random Things Tours for the place on the tour and to Corvus for sending me a review copy of the book.

You can buy Grace After Henry now in ebook and paperback.

Grace After Henry is funny and moving all at the same time, not an easy thing to achieve. But Eithne Shortall has definitely cracked it.

Grace’s boyfriend, Henry, has died. They were just in the process of embarking on the next stage of their life together when that was it, he was gone. She sees him everywhere, a natural effect of grief. He’s in the restaurant where she works, at the graveyard, in the street. But then one day Andy turns up and he looks just like Henry.

How does Grace deal with this? Well I can’t say as I would give away major spoilers, but what I can say is that Eithne Shortall deals with it beautifully. Grace goes through a myriad of emotions, as you would imagine. And I just loved her! She’s plucky, feisty, funny, she’s everything you want a protagonist to be.

Henry is only a character in flashbacks, but Andy is a prominent character and I thought he was great. In fact, there are many likeable, quirky characters in this book. Grace’s parents, for instance, are just brilliant, not to mention Aiofe, Grace’s arsy mate, Betty, Grace’s very contrary and irritable neighbour, and Grace’s boss at the restaurant, who is so famously rude to customers that the eatery is a sought after spot.

Grace After Henry took me through all the feelings. I cried, I giggled, I was moved, I was torn between wanting Grace to be able to move on and then thinking she shouldn’t. The flashbacks to Grace and Henry’s time together are bittersweet, with the knowledge that they don’t get their happy ending.

I couldn’t help but liken the writing style to Marian Keyes at times. The whole Irish humour, the bonkers family members and friends, and the way the book deals with great sadness without being maudlin were quite similar. But this is a writer with her own style and a fantastic talent. I found Grace After Henry to be a heart-warming and ultimately uplifting read. I think this book is going to be huge. Eithne Shortall studied journalism at Dublin City University and has lived in London, France and America. Now based in Dublin, she is chief arts writer for the Sunday Times Ireland. She enjoys sea swimming, cycling and eating scones.