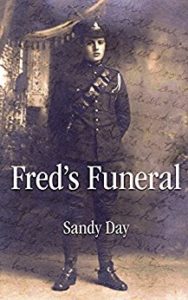 I’m so pleased to be able to review Fred’s Funeral by Sandy Day today. It’s a novella, so not a long read, and if you fancy reading it for yourself then you can get it from Amazon UK or Amazon US. Thank you to the author for providing me with a review copy.

Only at his funeral, does a family come to know a long neglected and shell-shocked soldier from WWI. Based on a true story.

Fred Sadler has just died of old age. It’s 1986, seventy years after he marched off to war, and his ghost hovers near the ceiling of the dismal nursing home. To Fred’s dismay, the arrangement of his funeral falls to his prudish and disparaging sister-in-law. As Viola dominates the remembrance of Fred, his ghost agonizes over his inability to set the record straight.

Was old Uncle Fred really suffering from shell shock? Why was he shut away for most of his life in the Whitby Hospital for the Insane? Why didn’t his family help him more?

I think the first thing that got my attention about Fred’s Funeral was the cover image. I love old photos and the picture of a man in WW1 uniform immediately piqued my interest. The story also appealed as we follow the recently deceased Fred as he hovers over his family and listens to them talking about him. Unfortunately, what they say, mostly coming from his sister-in-law, Viola, is untrue and Fred would dearly like to set them straight but all he can do is float and grit his teeth.

It’s an intriguing long novella at 129 pages. I felt so sorry for Fred as he had been incarcerated in a hospital for the insane for many years, supposedly suffering from shell shock. But there’s more to his story than that. The story flicks around between the current day (in this case, 1986) and various points in the past as we learn more about what happened to Fred during his life. Despite this flicking around, it’s very easy to keep up with the story.

It’s a sad tale, not just Fred’s plight but also the fact that his family seemed to know so little about him. He was just a shady figure in their lives as, I suspect, many elderly relatives are. It certainly reinforces my view that we should speak to our family and listen to their stories before it’s too late.

Fred’s Funeral is a bittersweet and poignant read about a misunderstood war veteran, and I thought it was a clever and well-written story. Sandy Day is the author of Chatterbox, Poems. She graduated from Glendon College, York University, with a degree in English Literature sometime in the last century. Sandy spends her summers in Jackson’s Point, Ontario on the shore of Lake Simcoe. She winters nearby in Sutton by the Black River. Sandy is a trained facilitator for the Toronto Writers Collective’s creative writing workshops. She is a developmental editor and book coach.