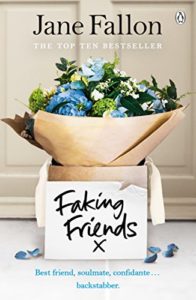 I do love Jane Fallon’s books. I read Getting Rid of Matthew when it first came out and I’ve read a couple of others too. Tantalisingly, I also have a few unread ones to look forward to as well. Today though, I’m reviewing her latest book, due out on 11th January. Thank you to Gaby Young from Penguin/Michael Joseph for the review copy.

Amy thought she knew everything there was to know about her best friend Melissa. Then again, Amy also thought she was on the verge of the wedding of her dreams to her long-distance fiancé.

Until she pays a surprise trip home to London. Jack is out, but it’s clear another woman has been making herself at home in their flat.

There’s something about her stuff that feels oddly familiar . . . and then it hits Amy. The Other Woman is Melissa.

Amy has lost her home, her fiancé and her best friend in one disastrous weekend – but instead of falling apart, she’s determined to get her own back.

Piecing her life back together won’t be half as fun as dismantling theirs, after all.

Here are the links to pre-order the ebook and the paperback.

I feel like there’s a bit of a theme going on in Jane Fallon’s books, one of revenge, plotting, secrets. And this is what she writes about really well.

In Faking Friends it’s all about getting even with someone you thought you could always trust. Amy is an actress, enjoying some moderate success in an American drama. Being away from home and her fiancé, Jack, is hard but it’s about to get even harder when she discovers he’s playing around with her best friend since childhood, Mel. Instead of confronting them she decides to make things a little difficult for them.

Amy is such a lovely person it’s a wonder she ever became friends with Mel in the first place, but then a lot of ‘friendships’ are between people who balance each other out. Where Amy is friendly and unselfish, Mel is jealous and bitchy. Amy is loyal, Mel is a backstabber.

I loved following Amy along her journey of discovery, as she finds out once and for all that she has a toxic friendship and as she tries to get her life back in order and come out the other side a dignified person. She’s quietly powerful, taking control, being strong and ultimately being the better person, despite also trying to get some revenge on her cheating fiancé and her so-called best friend.

There are back stories about Amy and Mel’s early friendship which help to show to the reader things that ought to have dawned on Amy before but, as I said, she’s a genuinely nice character. I really liked the characterisations of some of the other main players, mostly Amy’s other friends. Kat and Greg, in particular, are a great support to Amy and I loved them for their quirkiness.

I know that with a Jane Fallon book I will be getting a relatively light read but not one which lacks substance. I found this one quite thrilling with some unexpected twists and turns and there was one moment in particular when I clapped my hand over my mouth at the turn of events.

Faking Friends is a really fabulous read, a page turner. It’s well-plotted, well-written and it’s such an easy, engaging read. Jane Fallon is the multi-award-winning television producer behind shows such as This Life, Teachers and 20 Things to Do before You’re 30. Her debut novel “Getting Rid of Matthew’ was published in 2007 and became a Sunday Times Top Ten Bestseller as have her subsequent books ‘Got You Back’, ‘Foursome’, ‘The Ugly Sister’, ‘Skeletons’, ‘Strictly Between Us’ and ‘My Sweet Revenge”

Her 8th novel Faking Friends is available now to pre order in both paperback and for Kindle.