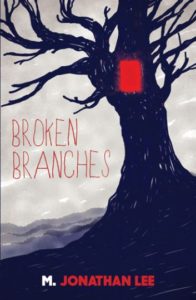 I’m pleased to be reviewing Broken Branches today. Readers of the blog and other bloggers will remember the cool promotional survival kits sent out by the publishers, Hideaway Fall, which really made a splash. So what’s Broken Branches all about?

‘Family curses don’t exist. Sure, some families seem to suffer more pain than others, but a curse? An actual curse? I don’t think so.’

A family tragedy was the catalyst for Ian Perkins to return to the isolated cottage with his wife and young son. But now they are back, it seems yet more grief might befall the family.

There is still time to act, but that means Ian must face the uncomfortable truth about his past. And in doing so, he must uncover the truth behind the supposed family curse.

There’s been a real buzz around this book, the first to be published by new publishers on the block, Hideaway Fall. Sometimes that buzz can cause a book to be a bit of a letdown. Was that the case this time? No! This is a book that I didn’t want to put down and M. Jonathan Lee has written a really suspenseful, intriguing book.

In a way Cobweb Cottage and the tree outside it are the main characters in this book. There’s talk in the Perkins family of a curse and it’s clear that there has been plenty of tragedy over the years. Ian Perkins lives in the cottage now with his family and he must try to get to the bottom of the truth about the curse.

I found Broken Branches to be a real page turner of a story. There are chapters ending on cliffhangers and with alternate chapters set in the past and the present I needed to keep reading to find out just what was going to happen next.

There’s a twist in the tale and I thought it was fairly obvious what it was going to be. But even so, I was still on the edge of my seat as it was revealed. I’m not sure whether I missed something about the ending though as it ended a little bit abruptly and in an unexpected way.

I thought this was a brilliant book. It’s sort of a gothic story looking at family dynamics with a mystery at its heart. The setting is very atmospheric with the remote farm cottage and the tree pointing its finger-like branches and casting a shadow over everything and everybody. If Ian had been telling the story in the first person I would have called him an unreliable narrator but as a reader looking on the whole thing is unreliable and I was constantly questioning what I thought I knew.

I loved the whole creepy feel of the book. It was all quite unsettling and I loved it!

With thanks to the publishers for the review copy. Broken Branches is available now in ebook and paperback. M. Jonathan Lee (also known as Jonathan Lee) is an award-winning novelist who has had two novels in the top 10 Amazon charts. He was born in Yorkshire, northern England where he still lives today.

His first novel, the critically-acclaimed The Radio was shortlisted for The Novel Prize 2012 and is the first in the loosely titled The ‘The’ trilogy.

M. Jonathan Lee works closely with Rethink and Mind Charities to raise awareness of mental health issues, and is a regular commentator on the BBC.

His latest novel, Broken Branches, is due out in July 2017, published by Hideaway Fall.