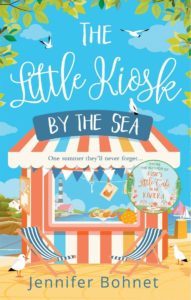 I’m thrilled to be part of a weekend book blitz for The Little Kiosk by the Sea by Jennifer Bohnet. I have a review for you but first of all here’s what the book is all about.

Meet Sabine, desperately fighting to save her little kiosk from closure whilst turning down her friend Owen’s proposals, time and time again.

Cue Harriet, returning to Dartmouth after thirty years, haunted by the scandal that drove her away and shocked by a legacy that threatens her relationship with her journalist daughter.

Enter Rachel, the mysterious newcomer who has an unexpected chemistry with a local widower, and who sets in motion a chain of events she could never have predicted…

One thing’s for sure, as the autumn tide turns, there’ll be more than one secret laid bare!

I thought I might like this book but it far exceeded my expectations and I loved it. It was an absolute delight from start to finish. With mostly short chapters I found I just couldn’t stop reading it.

At the start we are introduced to a number of different characters and I did wonder if it was all going to get a bit confusing but then I realised that they were all linked in some way and it quickly came together into a really heart-warming story.

It’s a very gentle book in many ways. It’s called The Little Kiosk by the Sea but the kiosk is only a very small part of the story. It’s certainly a central part and Sabine, who runs it and books the trips out on the boat, is a major character, but there’s also her brother, Johnnie and her friend, Harriet, along with BB who is trying to trace the English strand of his family, Rachel, who has a secret and Harriet’s daughter, Ellie who is about to get a big surprise.

There wasn’t a single character who was weaker than the others. I enjoyed reading about them all. The story is cleverly woven and although there were a few convenient coincidences I liked the fact that the ends were tied up so well.

I could almost smell the sea air, taste the coffee ice creams, imagine the kiosk and see the boats on the water. It’s one of those books where I almost wanted to jump into it and meet the characters.

As I was reading I just kept thinking “this is such a lovely book”. I got to the end and felt so happy and satisfied with it. I read it in two days which is really quick for me. I just couldn’t put it down. I’d highly recommend it for a feel-good summer read.

If you like the sound of this book then it’s available in ebook and paperback. You can also try and win a paperback copy of this one and Jennifer’s other book, Rosie’s Little Cafe on the Riviera (UK and Europe only) – good luck!

Thank you to Jenny Marston for the opportunity to be part of this weekend book blitz. Don’t forget to look out for other posts about this book this weekend. I’m English but I’ve lived in France for the past 17 years. After 11 years down on the Cote d’Azur where Richard my husband was a guardian for a villa, we moved from the Mediterranean coast to a small quirky cottage in Finistere, Brittany. A bit of a culture shock to say the least! When I’m not writing I love reading, cooking and having friends around for lunch – lunches that follow the French tradition of lasting for several hours. The Little Kiosk By The Sea is set in my absolute favourite place in England, Dartmouth South Devon, where we lived for several years before moving to France.