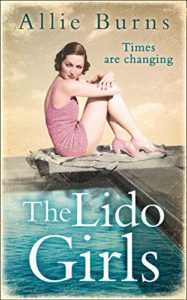 Posted on 7th November 2017 By Nicola

I’m delighted to be sharing my review of The Lido Girls by Allie Burns today as part of the blog tour. Thank you to HQ Digital, Netgalley and Jenny Marston from Neverland Blog Tours for the review copy and the place on the tour. Here’s what the book is about:

Natalie Flacker is tempted by the glamour of the new keep fit movement, but when she is dismissed from her prestigious job in PE she loses the life she so carefully built. Echoes of the war’s destruction still reverberate through her life, and now she is homeless, jobless and without prospects.

But connections made on a summer holiday, with her best friend Delphi, create opportunities. When Natalie is offered a summer job at a lido at the seaside, she jumps at the chance. But is she up to the challenge of taking on a group of unfit women in need of her help?

Set against the backdrop of the beginnings of the pioneering keep fit movement; this is a feel-good reminder of just what’s possible when you find the courage to follow your heart.

Spend a very British summer with The Lido Girls!

The title of this novel alone was enough to interest me. There’s something about The Lido Girls that speaks immediately of a particular time, Britain’s heyday I guess. And the cover image is incredibly appealing too.

So what about the story? It’s Natalie’s story. She’s almost 35 and it’s 1935. She’s teaching PE at a girls’ college until she accompanies her best friend, Delphi, to a meeting of The Women’s League of Health and Beauty which leads to her losing her job. She ends up working at a lido in St Durlstone for the summer alongside Delphi, and Delphi’s brother, Jack.

It’s an interesting read. It’s set at that point when so many women were considered to be ‘surplus’, that is many of their potential husbands were killed in the First World War. Whilst Natalie is wedded to her teaching career, she has never been able to shake a need to be married.

Delphi has an illness which means she is looked after and treated with kid gloves. Natalie is devoted to her but their friendship suffers because she longs to join The Women’s League of Health and Beauty. Again, this was a really interesting aspect to the story for me. The league is a fascinating organisation, set up to help women exercise together. In The Lido Girls it helps not only the ‘surplus’ women but also those whose husbands no longer notice them. There’s a fascinating piece at the end of the book by Margaret Peggie, who is the Vice President of the Fitness League, the name by which the organisation is now known, who clearly remembers her mother cycling away to the league and leaving her three children with their father, something that rarely happened back then.

The social history side of the book, the lido and life working there seemed to be really well-researched by the author and she really captured the feel of it all. I loved the girls who worked there, Betsy, Edith, Yvonne. I loved the sense of community that came from them working at the lido together and how Natalie became a part of them. She goes through quite a journey of discovery about herself during the summer. I couldn’t completely take to Natalie or Delphi though. I think there was an air of detachment about Natalie as a character that carried through to me as I was reading but nevertheless I wanted her to be at peace with herself and her life decisions.

I thought The Lido Girls was an accomplished debut novel and I’m really pleased to note that Allie Burns is writing another book set in those compelling interwar years.

If you like the sound of The Lido Girls then you can buy the ebook now.

And do have a look at the other blogs taking part in the tour. Allie lives in Kent with her family and two tortoises. When she’s not writing for business or penning her Women’s Historical Fiction, Allie enjoys swimming and yoga. She has an MA in Professional Writing from Falmouth University and The Lido Girls is her debut novel. She is currently working on a second interwar years novel, which is due for publication in the summer of 2018.