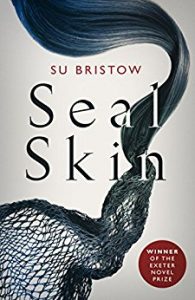 I’m over the moon to be posting this today as part of the blog tour for this fabulous book. It feels like I have been waiting for ages for this day to come around. First of all, what’s it all about?

And now my thoughts:

In all honesty, books about myths and legends are not always my thing but I had heard so much about Sealskin, all fabulous, that I really wanted to read it. I knew that Selkies were seals that shed their skins and become people, but that was the extent of my very limited knowledge so I approached this book with interest.

It starts with a scene that made me feel quite uncomfortable but I soon came to realise that it wasn’t a clear cut situation and it was absolutely necessary to make the story work. Su Bristow did an excellent job of writing that scene with as little shock factor as possible and underplaying something that was probably needed to take the story further. Donald is a man who has sometimes found life very difficult and has been a bit of an outsider but when he sees the Selkies one night he takes a course of action that will change him and his life forever. I came to really like Donald, despite the opening section, as he grew as a consequence of his actions that night.

I couldn’t quite work out when the story was supposed to be set. I suppose that, like the legend, it’s timeless. The setting itself, a small Scottish fishing village, was so vividly described that I could imagine it all so clearly. The house, the beach, the sea, I could almost feel the sea breeze in my hair and imagine looking out at the fishing boats or indeed, observing the very same sight as Donald that night.

Donald, Mhairi and Donald’s mother, Bridie, are the main characters but there are quite a few supporting characters too who all add to the sense of a small and enclosed community. Mhairi herself is so well-drawn and vibrant, no mean feat considering she has no words, and she is an immensely likeable and calm character.

I found this to be a book which needed concentration, particularly at the beginning. It’s an intense story and I read it quite slowly up to around the half way mark and then I was drawn right in and raced through to the poignant and heartrending conclusion.

Sealskin is a tender, moving and gentle read. Whilst there is an obvious magical feel to it, it’s so well written that it becomes almost believable. It’s a really lovely story and one which I think will stay with me.

With thanks to Orenda Books for the review copy and the place on the blog tour, and to Anne Cater for organising the tour. Sealskin is available now in paperback or ebook.

Why not check out the other blogs taking part in the tour. Su Bristow is a consultant medical herbalist by day. She’s the author of two books on herbal medicine: The Herbal Medicine Chest and The Herb Handbook; and two on relationship skills: The Courage to Love and Falling in Love, Staying in Love, co-written with psychotherapist, Malcolm Stern. Her published fiction includes ‘Troll Steps’ (in the anthology, Barcelona to Bihar), and ‘Changes’ which came second in the 2010 CreativeWritingMatters flash fiction competition. Her debut novel, Sealskin, is set in the Hebrides, and it’s a reworking of the Scottish legend of the selkies, or seals who can turn into people. It won the Exeter Novel Prize 2013. Her writing has been described as ‘magical realism; Angela Carter meets Eowyn Ivey’.