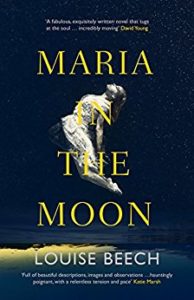 It’s finally my turn on the Maria in the Moon blog tour. It was one of my most highly anticipated books of the year and I’m pleased to say that after the big build up I wasn’t disappointed at all. Far from it. So what’s the book all about?

I loved Louise Beech’s last book, The Mountain in My Shoe but I have yet to get to her first one, How to Be Brave (note to self, must remedy that!). So whilst I couldn’t wait to get my hands on Maria in the Moon as I felt sure I would love it, after only reading one of her books I couldn’t yet say that she was one of my absolute favourite authors. However, now I have read two I can say that she is firmly on my list of those writers whose books I would gladly read without even seeing a blurb. Yes, she’s that good.

In Maria in the Moon we meet Catherine. She was once known as Catherine-Maria but she can’t remember what happened in her ninth year and why everybody dropped the Maria and started calling her Catherine. She’s a very flawed heroine and at times not easy to like. But as I started to understand more about her and more is revealed about her past I had a greater understanding for why she behaved as she did.

I first cried whilst reading this book at page 34. Catherine’s house has been flooded and she is working at Flood Crisis answering the phone to people who need to talk. Some of the calls she received really moved me. Page 34 wasn’t the first time my eyes leaked!

This wasn’t only a book that made me cry though. It also made me laugh. Catherine is quite wickedly and darkly funny. I suspect her humour was a coping mechanism but it did amuse me.

Whilst the way the story was headed became apparent fairly early on, something happened towards the end that literally made me do a double take. What a shocker that was. It helped to take the story towards a conclusion that worked for Catherine and for me as a reader.

This is not a book to be rushed, rather one to be savoured. Each word is important and I didn’t want to miss a thing. Sometimes I went back and reread a sentence or paragraph. I needed to absorb it all. Louise Beech has such a lovely way with words. It’s hard to describe how beautifully she puts across her characters’ thoughts, fears and feelings. Her writing is insightful. Her stories don’t need to have intense plotlines and in fact Maria in the Moon is more of a slice of life story, a cataclysmic time in Catherine’s life.

It’s a wonderful read and I absolutely loved it (just in case you weren’t sure!).

With thanks to Orenda Books and Anne Cater for the review copy and the place on the blog tour. Maria in the Moon is available now in paperback and ebook.

There are lots of fabulous blogs taking part in this tour so please do go and have a look. Louise Beech remembers sitting in her father’s cross-legged lap while he tried to show her his guitar’s chords. He’s a musician. Her small fingers stumbled and gave up. She was three. His music sheets fascinated her – such strange language that translated into music. Her mother teaches languages, French and English, so her fluency with words fired Louise’s interest. She knew from being small that she wanted to write, to create, to make magic.

She loves all forms of writing. Her short stories have won the Glass Woman Prize, the Eric Hoffer Award for Prose, and the Aesthetica Creative Works competition, as well as shortlisting twice for the Bridport Prize and being published in a variety of UK magazines. Her first play, Afloat, was performed at Hull Truck Theatre in 2012. She also wrote a ten-year newspaper column for the Hull Daily Mail about being a parent, garnering love/hate criticism. Her debut novel was a Guardian Readers’ pick for 2015.

She is inspired by life, history, survival and love, and always has a story in her head. Her debut novel, How to be Brave, came from truth – when Louise’s daughter got Type 1 Diabetes she helped her cope by sharing her grandad’s real life sea survival story. Her second novel, The Mountain in my Shoe, will be released in September 2016 and was inspired by her time working with children in the care system.

When she was fifteen Louise bet her mother ten pounds she’d be published by the time she was thirty. She missed this self-set deadline by two months. Her mother is still waiting for the money.