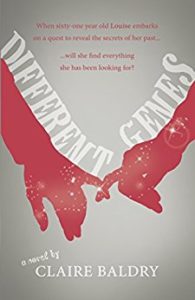 Posted on 1st November 2017 By Nicola I’m delighted to be part of the blog tour today for Different Genes by Claire Baldry. Thank you to Claire for the review copy and the place on the tour. I have a lovely guest post and my review for you but first here’s what the book is about:

Sixty-one year old Louise finally learns she is adopted after the death of her mother. She embarks on a quest to reveal the secrets of her past, helped by new companion and lover, Simon, whom she meets after joining an Internet dating site.

In her first full-length novel, author Claire Baldry sensitively explores the growing closeness between the newly retired couple as they develop their mutual understanding and physical relationship.

The reader is reminded of the changing values of the postwar years, while Simon and Louise visit places from Louise’s past and meet people who knew her mother and grandmother. Together, they begin to unlock the forgotten secrets of Louise’s past – but in the face of so much change and uncertainty, can Louise let her relationship flourish?

The story is set mainly in the author’s home county of East Sussex, but finishes in Kent, when Louise and Simon finally visit her birth mother’s grave at a convent in Chatham. This immensely readable journey of discovery is a charming and bittersweet mixture of romance, sadness and genuine suspense.

I enjoyed reading this debut novel by Claire Baldry. It engaged me from the beginning and I wanted to learn and understand more about Louise and her past.

Different Genes is a very apt title as Louise finds out, at the age of 61, that she is adopted. But this is only half of the tale as the real story is Louise’s new found romance with Simon Ellis, a man she meets through internet dating.

The romance is a tender and touching one and I was so glad the two characters found each other. They’re incredibly polite and solicitous towards each other in what seems to be quite an old-fashioned relationship in many ways.

But it’s not all sweetness and light. Louise’s early years led to her adoption and she sets out to find out what her parents never told her: why? There are also some quite sinister undertones to the story as well.

I thought this was a really good read. My one criticism would be that the dialogue is quite precise and I suspect that is the teacher in the author coming through. But I found I looked forward to picking up the book and finding out what was going to happen next. Despite some of the themes, it’s quite a gentle read and is ultimately quite an uplifting one. I read it in a couple of days and it was a pleasure to do so.

If you like the sound of Different Genes then it’s available now in ebook and paperback.

There are some other fabulous blogs taking part in the tour so do go and check them out. From Poetry to Prose by Claire Baldry

In my hometown of Bexhill on Sea I am known as the local poet. I have always been able to write in rhyme, and since retiring from a career in education, my hobby of writing and performing lighthearted ‘Pam Ayres’ style poetry has evolved into a way of fundraising for charity. My poems sometimes appear in the local paper or on local radio, and I am frequently invited to clubs, such as the WI, to read my work and talk about my writing. The fees are donated to charity, and earlier this year my husband and I won the Diabetes UK SE Inspire Award for innovative ways of fundraising.

I especially enjoy writing longer narrative poems which tell romantic tales about older heroes and heroines. I try not to take myself too seriously, and my poems and talks make people laugh. But always in the back of my mind there has lingered an element of self- doubt. I have never regarded myself as a ‘real’ writer. ‘Real’ poets, I believed, do not, these days, write in conventional rhyme. Instead they compose seriously structured pieces which contain multiple layers of meaning…… and ‘real’ writers write books.

So last year I decided to write a novel. I cast aside my obsession with rhyme and joined the many aspiring writers who attempt to write a novel during the novel writing month of November. By the end of five weeks I had produced over 50,000 words. During the next few months I edited and rewrote sections, and in March this year I submitted the manuscript to Matador for consideration. Matador is the self-publishing section of the Troubador Publishing Group. They are reasonably selective about the novels they accept for publication and consequently have a good reputation within the self-publishing industry. My novel is an author led romantic narrative tale about a couple in their early sixties. It combines a love story with a mystery, and I would describe it as an easy read. I have tried to write it well, but there is not a lot of hidden meaning. What you see is what you get. On reflection, I realise that there are actually a number of similarities between my poems and my debut novel. The transition from poetry to prose was not as significant as I originally intended it to be. I just dropped the rhyme!

Thanks so much, Claire. I must say, I like a poem that rhymes and I think you were already a ‘real’ writer. In 2008 Claire Baldry retired from her career as a headteacher and English Advisor, and reinvented herself as a writer, blogger and performance poet. Now, aged 62, Claire has published four booklets of lighthearted poetry, an autobiographical novella called ‘South Something’, and, most recently, her debut novel ‘Different Genes’. She has a regular schedule of public speaking engagements where she reads excerpts from her work and talks with humour about her transformation from headteacher to writer. Claire hopes her books will especially appeal to readers in mid-life and beyond, but also give an insight to adult readers of all ages into the lives and ambitions of the ‘baby boom’ generation. Claire lives on the East Sussex coast with her husband Chris.