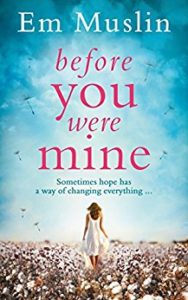 I’m really pleased today to be posting my review of Before You Were Mine by Em Muslin as part of the blog tour.

Sometimes hope has a way of changing everything…

Just hours after giving birth, Eli Bell is forced to give up her newborn baby daughter for adoption. Devastated, she tries desperately to rebuild her shattered life. Then, over thirty years later, Eli catches sight of her daughter. And she knows that she must do everything to find a way back into her life. Even if it means lying… While her husband Tommy must grow to accept his own part in the events of her early life, he can only try to save her before her obsession with the young woman ruins them both.

Don’t miss the breathtaking debut Before You Were Mine by Em Muslin! Perfect for fans of Jodi Picoult, Anne Tyler, Joyce Carol Oates.

Praise for Before You Were Mine:
​
“A heartbreaking novel about what happens when we don’t have the power to make our own choices. BEFORE YOU WERE MINE is a moving and emotional story that is sure to touch readers’ hearts.” ~ Karen Katchur, author of THE SISTERS OF BLUE MOUNTAIN

“5 STARS – A love story that surprises in so many ways. Em Muslin has written a great debut book here. Before You Were Mine explores love on so many levels it had me reaching for the tissues more than once. It’s heartening to see people who seem totally self-serving suddenly step up and make things right. I would like to share some fudge pie and coffee with Eli.”  – Jo Ann Mapson Best selling author of  author of:
Owen’s Daughter/Finding Casey/Solomon’s Oak/The Owl & Moon Cafe/The Bad Girl Creek trilogy/The Wilder Sisters/Hank & Chloe; Loving Chloe/Shadow Ranch/ Blue Rodeo

Em Muslin’s Debut novel is heart stoppingly beautiful.
Muslin was born to write, her observations are breathtaking
I was so involved in the story, I missed my stop on the train.’
– Lynn Parson – Radio Broadcaster

5 STARS –Pleasing to the mind,
​Em Muslin’s debut novel, “Before You Were Mine” is written with a beautiful touch where heartbreak meets love and loneliness meets freedom. Every reader can benefit from reading this book as it grabs onto your heart strings and pulls you in to compelling story that includes all aspects of family. This story is not only a great piece of literature, the story unfolds into much more than just Eli’s obsession but digs deeper into the life she left behind years ago. – Biblio Beauty Book Blog

Before You Were Mine takes us to Alabama where we meet Eli Bell. Now 46, her daughter was wrenched away from her shortly after birth 32 years earlier and Eli has longed for her ever since.

I thought that longing really came through in the narrative. Eli is quite worn down by a horrible mother and a so-called friend who is nothing of the sort but she just takes it on the chin and carries on regardless. You can tell that she’s already been dealt the worst blow of her life in losing her daughter.

It’s hard to imagine the hell of going through pregnancy and childbirth and in effect having nothing at the end of it. But it’s not hard to imagine seeing that child’s face everywhere, in people you pass in the street, people you see on the television. That’s what happens to Eli and she latches onto a young woman that she meets who she is convinced is her daughter.

I liked Eli a lot. Long-suffering daughter, loyal wife to steady Tommy, but a mother to nobody.  It’s quite a heartbreaking story in many ways but I did find that this book didn’t quite hit the emotional spot for me. I would have expected to be a lot more moved by the story and the characters but I wasn’t and I’m not entirely sure why.

It’s a good debut novel though. The characterisations are strong, the setting is easy to imagine and the storyline overall is convincing. It’s quite an evocative book with a sad story at its heart. I shall look forward to seeing what this author comes up with next.

With thanks to the publishers and Jenny Marston at Neverland Book Tours for the review copy and the place on the blog tour and is available now in Kindle ebook.

And don’t forget to check out the other great blogs taking part in the tour. Em Muslin has worked in the film and television industry for over 20 years. She first fell in love with reading and writing after experiencing Judith Kerr’s When Hitler Stole Pink Rabbit. She hasn’t stopped devouring books ever since.

She loves words that capture an experience or emotion in a singular form: her current favourite, describing herself, isnemophilist.

Em’s writing focuses on the texture of domestic life, relationships, family and the pressures of social convention. Her characters are often fighting to become the hero of their own story, searching for hope, despite the adversities that life inevitably brings.