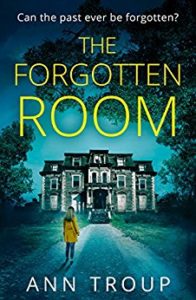 I’m so pleased to be taking part in a blog blitz today for Ann Troup’s new book, The Forgotten Room. Thank you to HQ Digital and Jenny at Neverland Blog Tours for the review copy and the place on the tour.

I’ll be sharing my review and there’s a fab giveaway taking place on the author’s Twitter page too but first here’s what the book is about:

Can the past ever be forgotten?

As soon as nurse Maura Lyle sets foot inside the foreboding Essen Grange, she feels shivers ripple down her spine. And the sense of unease only increases when she meets her new patient, Gordon Henderson.

Drawn into the Henderson family’s tangled web of secrets and betrayals, Maura can ignore the danger lurking behind every door no longer. Even the door she has been forbidden from opening…

Essen Grange is a house with dark and cruel intentions. But now that darkness has turned on her, can Maura escape before it’s too late?

The chilling new novel from the bestselling author of The Lost Child and The Silent Girls. Perfect for fans of Erin Kelly, Claire Mackintosh and Tracy Buchanan.

The Forgotten Room has a very enticing cover and title. The idea of the sprawling house with a secret really caught my interest. And wow, what a tangled web this story is!

Maura Lyle is a nurse who is asked for by name to go and work at Essen Grange and look after an elderly man with dementia. But from the moment she gets to the house she is uncomfortable, she just feels ill at ease with the whole place and the set up.

I must admit I found it hard to take to Maura. She’s prickly and quite harsh and actually rather unlikable. But some of the people she meets in this book are even more unlikable so I guess she’s the best of the bunch. Well, her and police officer, Mike Poole, who was my favourite character.

The book seems to me to be one of two halves. The first half is about Maura’s time at Essen Grange. I was quite surprised when this section ended as I was then wondering what the second half of the book would cover. What it did cover was the more interesting bit of the book for me. I won’t give anything away but it was a little bit police procedural and a little bit dark thriller. I think this is a book which crosses all the crime/thriller/psychological genres.

There are a lot of characters in the book and I did sometimes find myself thinking “who’s so and so” for a minute until I had a good rummage round my head and remembered who they were. And the story is so intricately plotted that it’s a wonder it didn’t blow the author’s mind. I was really impressed with how it all came together and how intertwined all the characters were and more than anything I was impressed with how much I was kept guessing all the way through.

So a fairly slow first half and a faster paced second half, a disturbing set of stories brought together into one tangled tale and some thoroughly twisted characters – this is a great read for this time of year as the dark nights come in.

If you like the sound of The Forgotten Room then the ebook is available now.

And do go and have a look at the other blogs taking part in the blitz. The Forgotten Room is Ann’s third book, following on from The Lost Child and The Silent Girls. She lives in Devon near the sea and spends her time either writing or dabbling with art. To see what she’s getting up to next follow on Twitter or Facebook.