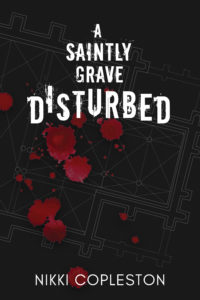 I’m delighted to be taking part in the blog blitz today for A Saintly Grave Disturbed by Nikki Copleston. My review is further down this post but first here’s what this novella is about:

Finding the tomb of a medieval abbot would mean a lot to Beth – fifty years ago, her grandfather was forced to abandon his own search for the tomb, but nobody knows why. Can Beth finish what he started?

As one incident after another threatens to sabotage the dig, Detective Inspector Jeff Lincoln is called in, and when a bungled burglary at the museum turns into murder he finds a shocking link to a case he’s already investigating.

And if you like the sound of it then here are all the buying links you need:

A Saintly Grave Disturbed is a novella of around 118 pages. Despite this shorter length it is not short on action.

The story is centred around an archaeological dig at an abbey run by Beth and Josh. Beth is desperate to find the tomb of the Angling Abbot, a search her grandfather abandoned in the 1950s. But when a set of bones are found that are not nearly old enough to be there, DI Jeff Lincoln is called in.

I know that the author has written a full length book featuring Jeff. I haven’t read it but it didn’t matter at all as this novella can be read as a standalone story. I liked Jeff. He’s a good policeman and has a good team around him. As one thing after another happens that may or may not be linked to the dig he has to try and find out why. I also liked Beth and whilst I suspect she may not pop up in another of Nikki Copleston’s books she was a really interesting character and I thought her family background was a nice aspect to her role in the story.

A Saintly Grave Disturbed is really well-plotted with lots of intrigue and ups and downs. I was a little surprised at the ending seemed a bit abrupt but everything was nicely wrapped up so it didn’t really matter. This is a compelling read and I enjoyed it very much. Nikki Copleston worked in London for many years before moving back to the West Country where she was brought up. In 2016, she published the award-winning The Shame of Innocence, featuring DI Jeff Lincoln, and is currently rewriting an earlier Jeff Lincoln crime novel, The Price of Silence.

Nikki is a member of Frome Writers’ Collective, which supports and promotes writers in the area round Frome. She’s also a founder member of Stellar Scribes, a group of novelists from Wells and Glastonbury who love to share their passion for a good yarn, mainly through talks and events in libraries.

Fascinated by history, she enjoys exploring with her camera, photographing landscapes and quirky architecture, old and new. She and her husband now live in Wells, Somerset, with their cat.