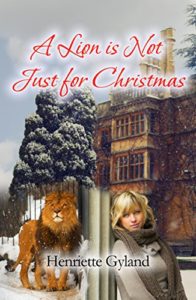 I’m delighted to be taking part in the blog blitz today for A Lion is Not Just for Christmas by Henriette Gyland. Thank you to the author and Brook Cottage Books for the review copy and the place on the blitz.

This is a novella of 134 pages and is such an enjoyable read. Here’s what it’s about:

Is there life after the circus has left town?

Circus performer Justine Belmont works with big cats, but when the circus is disbanded and the old lion is sold to a private menagerie at a stately home in Norfolk, she is asked to spend a few weeks settling him into his new environment. When she arrives at the estate, however, she receives a mixed welcome.

The groundsman Tom Yates resents her presence as he doesn’t feel he needs her help with the lion. He revises his opinion when he sees the bond between her and the big cat, and she and Tom grow closer, although Justine remains torn about her feelings for him.  The lady of the house, Priscilla – who is married to the reclusive owner, Lord Brooks’s, grandson – is not so easily convinced. She perceives Justine as a threat for the male attention and her plans for the manor. And her two young daughters are a little too curious about the lion for their own good.

When unsettling events occur, Justine begins to wonder if there is more to Priscilla’s animosity than meets the eye. Can Justine keep herself and everyone else safe until it’s time for her to leave again and start a new life elsewhere?

If it appeals to you too then here are all the links you need and do read on for my review and a short extract.

Scene when Justine and Tom meet, in reality, for the second time.

Not many men had red hair like that and wore it so unashamedly loose like a rose gold crown. This groundsman – Tom – was the reason Justine had nearly missed a step during the last performance of the season. As far as she was aware ginger men preferred to keep their hair cropped short or even shaved off, fearing that it would make them look effeminate. Or something like that.

There was nothing effeminate about this guy. On the contrary, Justine thought, drinking in his broad shoulders, strong hands and sturdy workman’s clothes. He was every bit a man.”

A Lion is Not Just for Christmas is such a lovely story. At 134 pages it’s not a long one but it’s packed with romance and intrigue. I loved the background story of the circus that Justine’s family were part of and when that disbanded I enjoyed it when Justine accompanied Rexus the lion to his new home at Lord Brooks’ menagerie. Such interesting settings that combined to make this a fabulous story to read. How many books have a lion as a character?

Justine is an excellent protagonist. She’s strong and brave, thinking nothing of getting quite close to the big cats. I really liked her interactions with Tom, the groundsman, and how they became closer as the story progressed. Not to mention her run-ins with Priscilla, and Priscilla and Henry’s children’s preoccupations with the lion.

There are secrets that I can only hint at without giving too much away, but I thought how the whole thing came together was really clever. It’s a feel good story with some fascinating characters and a really interesting storyline. I found it a pleasure to read and liked Henriette Gyland’s style very much.

Henriette Gyland grew up in Northern Denmark but moved to England after she graduated from the University of Copenhagen. She wrote her first book when she was ten, a tale of two orphan sisters running away to Egypt, fortunately to be adopted by a perfect family they meet on the Orient Express.

Between that first literary exploit and now, she has worked in the Danish civil service, for a travel agent, a consultancy company, in banking, hospital administration, and for a county court before setting herself up as a freelance translator and linguist. Henriette recently began to pursue her writing in earnest winning the New Talent Award in 2011 from the Festival of Romance and a Commended from the Yeovil Literary Prize.