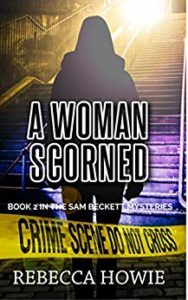 I’m delighted to welcome Rebecca Howie to my blog today with a Q&A. She’s the author of the Sam Beckett Mysteries of which there are two in the series so far: The Game Begins and A Woman Scorned.

It’s been four years since the car crash took away her father and Sam Beckett’s nightmares are back with a vengeance.

When her friend suggests she take a PI course to distract herself, Sam agrees, but she soon realises it won’t be as simple as she expected when her first case leads to a woman being killed, her husband accused of her murder, and a series of threatening text messages sent to her phone which lead Sam to believe that her father’s crash might not be the accident everyone thought it was.

Returning home days after leaving town wasn’t a decision Sam Beckett made lightly, and the newspaper articles detailing her shooting aren’t making her choice any easier to accept.

When a therapist is found dead in her office, Sam decides to work with CID and Detective Marshall on the case, hoping that the dead woman’s troubles will be enough to help her forget her own. but with Dr Weiss’ perfect image slowly crumbling as the investigation progresses, Sam finds that she isn’t the only person hiding behind a lie, and that uncovering someone else’s could have been what led Dr Weiss to her death.

1. First of all, can you tell me more about your books and where the idea came from for them?

The Game Begins and A Woman Scorned are books one and two in my YA series The Sam Beckett Mysteries.

I started writing The Game Begins because I was reading loads of mystery novels and realised that the detectives in them are always middle-aged, and we only learn of their pasts through conversations they have when they’re drunk or trying to get a suspect to open up to them.

I couldn’t understand why that was, so I wanted to write a detective story that started from the beginning.

2. How did you come up with Sam Beckett, the main protagonist in your books?

Sam was an amalgamation of a few different characters I’d written before I started TGB, and she was inspired again by the protagonists of those mystery novels I always read, because I wanted to explore the transition from regular person to tortured-misunderstood-genius.

I was reading a lot after I left school, and like with wondering why detective stories always start in the middle when they’re already in their forties and fifties and their lives are ruined, I was curious as to what could change someone to that point where they have few friends and they don’t like to trust anyone.

3. Your books form part of a series. Did you intend that to be the case when you came up with the idea for the first book or did it develop as you went along?

I hadn’t planned on writing any books when I started the first draft of The Game Begins, and it wasn’t until I was almost halfway through that I decided I had nothing to lose by completing it and self-publishing it.

Writing the sequel felt like a necessity the way I’d left things, and I wanted to find out if I could write one, since I’d managed to accomplish the goal of writing a full-length novel.

I became a writer when I was about eight or nine after a party I went to and everyone was given notebooks as party favours.

For some reason, I was more interested in the notebook than the birthday cake, so while on my way home, I was thinking up things to fill all the blank pages with.

That led on to short stories, and eventually longer ones, but I never finished any until I was in my teens and the local library went on fire, so I had a lot of free time to fill during the summer.

If I wasn’t a writer, I’d probably be binge-watching TV shows on Netflix, or reading more than I do already.

5. I understand your books are self-published. Why did you take that route and has it worked well for you? Do you have any advice for budding writers thinking about self-publishing?

I decided to go the self-publishing route because I thought it seemed far simpler than trying to find an agent and a publicist and a publishing company who would be willing to take a chance on me and Sam.

It’s worked out better than I thought it would, as recently both books became available for purchase through Waterstones, and both The Game Begins and A Woman Scorned placed under 20 in their categories on Amazon within just a few months of their release.

As far as advice goes, a really sensible thing I was told by another writer was to just write, and don’t worry about everything else: the publishing and the sales and the marketing are a lot easier if you have loads of books to your name and potential fans can see that you’re serious about your writing.

I’ve recently started making outlines for my writing, but I only attempt them if I’m a few chapters in and want to keep writing the story.

If it doesn’t interest me, or trying to think of what to write next becomes more stressful than fun, I’ll give up and move on to something else.

My routine is to write in the morning before I go out for the day. I used to write whenever I could find the time, but I’ve found it easier keeping a few hours aside each day and writing only during that time.

If I get stuck with a scene or a chapter, I’ll either reread the previous books, or try writing short stories featuring the character who’s giving me the most trouble.

9. You describe yourself as a ‘procrastinating writer’. What do you find yourself doing instead of writing?

Researching was a huge distraction during the last half of A Woman Scorned, and I could waste hours reading up on the things I was writing about.

I spent a whole day once reading up on the structure of the Scottish police, and then comparing it to the English service, and then to the American, so when I started writing the third book, I save all my questions until I’ve finished writing for the day before I go in search of answers.

10. What are you planning to write next and where will it take us?

I’m currently working on the third book in the Sam Beckett Mysteries, and after that, maybe a fourth, or something completely different.

Thanks so much, Rebecca. Good luck with book three!

Rebecca Howie is a procrastinating writer from Scotland, who prefers spending her time in fictional worlds rather than the real one.

She self-published her first novel, The Game Begins, at 18, and it reached 2nd in the Teen and Young Adult Detective category on Amazon after its release in February 2016.