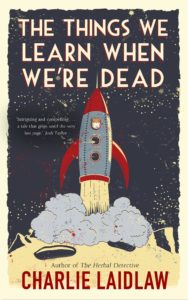 I’m delighted to welcome Charlie Laidlaw to Short Book and Scribes today. Charlie is the author of The Herbal Detective and the book he’s going to talk about today, The Things We Learn When We’re Dead which, can I just say, has the most superb cover. It also sounds like a fantastic read. I have a guest post from Charlie about his inspiration and the fact that it’s a reworking of The Wizard of Oz. But first, here’s what the book is about:

On the way home from a dinner party she didn’t want to attend, Lorna Love steps into the path of an oncoming car. When she wakes up she is in what appears to be a hospital – but a hospital in which her nurse looks like a young Sean Connery, she is served wine for supper, and everyone avoids her questions. It soon transpires that she is in Heaven, or on HVN. Because HVN is a lost, dysfunctional spaceship, and God the aging hippy captain. She seems to be there by accident. Or does God have a higher purpose after all? At first Lorna can remember nothing. As her memories return – some good, some bad – she realises that she has decisions to make and that she needs to find a way home…

The question that most authors are asked, including me, is how the idea for the book first came about.

I suppose it’s an obvious question, but the trouble is that it’s almost impossible to answer.

For me at least, I take inspiration from many things so that it can take a long while for a less-than-inspired first idea to become an actual book.

My first novel, The Herbal Detective, was a satire on superstition, and how popular media outlets such as the Daily Mail delight in making certain people the absolute source of all our problems.

Those people have variously been hoodies, single mothers, benefits scroungers, Muslims, immigrants…and I’m probably missing a few off the list.

The issue being that we define ourselves by whom we first exclude, and then blame for all society’s ills.

However, that bit of inspiration took me over twenty years to write, so maybe that makes me a less-than-inspired person or a very lazy writer.  (I’ll happily admit to both).

However, for my current novel, The Things We Learn When We’re Dead, there was a point of singularity – a moment when an initial lucid thought became an actual starting point.

That came on a train from Edinburgh to London.  For no reason whatsoever, the idea for the book came into my head.

It was an apt place to have that beginning because, being a civilised place, Edinburgh is the only city in the world to have named its main railway station after a book.  (Waverley, in case you don’t know).

Part of the inspiration was a quote from the Roman emperor and philosopher Marcus Aurelius Antoninus who wrote that “our life is what our thoughts make it.”

It’s a quote that had been swirling around my mind for some time because I’d always thought that life is what happens to us, and that our thoughts are no more than the sum of everything we’ve done and everyone we’ve met.

But, from a different perspective, it’s also about memory – and memory can be a fickle thing.  We remember some things because they’re important, and we discard others because they seem trivial.  But suppose we’ve, at least partly, been remembering the wrong things?  Or remembering them in the wrong order?

From that perspective, what would happen if our memories could be reordered, so that we could look back on our lives and ourselves from a different perspective?  In other words, would we be the same person?

It’s the only train journey I’ve ever been on where I hoped for signal failure, or for spontaneous industrial action.  I could have sat on that train for another five hours and, when I got home, I wrote the first chapter and the last chapter.  The first chapter has changed out of all recognition, but the last chapter is still pretty much the same.

The story is about the small decisions that my central character makes, and of their unintended consequences.  By the end of the book, her memories have been rearranged, and she can see herself in a new light.  Her old memories, shuffled into a new pattern, make her a different person.

It’s about being given a second chance and that is, perhaps, one of the most universal and recurring themes in literature.  It’s also the central theme of the Wizard of Oz – how a young girl comes to reassess her life and find a new beginning. There’s no place like home is not just a physical place but a state of mind.

So, in writing The Things We Learn When We’re Dead, I had to decide whether to ignore the Oz inspiration or to celebrate it, and I decided on the latter because, I thought, there’s no harm in retelling a classic story and giving it a modern makeover for an adult audience.  After all, there is nothing new under the literary sun.  Everything – absolutely everything – has been written about many times before.

All a writer can do is revisit old themes and try to find an original way of retelling them.  But it also meant that I could work in some of Oz’s iconic fixtures and fittings, from a scarecrow to a cowardly lion, and from a yellow-brick road to ruby-red slippers.

But it’s also very deliberately written with a degree of subtlety, so that many readers won’t necessarily realise that it’s a nod to L Frank Baum or the iconic film.  The links and allusions are there, but not everyone will get them.  They don’t need to; all they need do is enjoy it.

It’s a slightly surreal book, set mainly in Edinburgh and East Lothian.  I hope it has humour, without being a comedy.  I also hope it has heart, like the Tin Man who’s also in it, because it’s a story we can all relate to.

But more than anything it’s a celebration of that universal happy ending: we all get a second chance.  The central character in my book, like Dorothy before her, gets finds hers – and even gets to click her heels together.

Thank you so much, Charlie for such a fascinating guest post. If you like the sound of The Things We Learn When We’re Dead then you can buy it in ebook and paperback now. I am the author of two novels, The Herbal Detective (Ringwood Publishing) and The Things We Learn When We’re Dead (Accent Press).  Assuming we don’t experience nuclear Armageddon in the immediate future, and I’m not betting against it, a third novel, Dark Matters, is due to be published by Accent Press in January 2018.

I was born in Paisley, central Scotland, which wasn’t my fault.  That week, Eddie Calvert with Norrie Paramor and his Orchestra were Top of the Pops, with Oh, Mein Papa, as sung by a young German woman remembering her once-famous clown father.  That gives a clue to my age, not my musical taste.

I was brought up in the west of Scotland (quite near Paisley, but thankfully not too close) and graduated from the University of Edinburgh.  I still have the scroll, but it’s in Latin, so it could say anything.

I then worked briefly as a street actor, baby photographer, puppeteer and restaurant dogsbody before becoming a journalist.  I started in Glasgow and ended up in London, covering news, features and politics.  I interviewed motorbike ace Barry Sheene, Noel Edmonds threatened me with legal action and, because of a bureaucratic muddle, I was ordered out of Greece.

I then took a year to travel round the world, visiting 19 countries.  Highlights included being threatened by a man with a gun in Dubai, being given an armed bodyguard by the PLO in Beirut (not the same person with a gun), and visiting Robert Louis Stevenson’s grave in Samoa.  What I did for the rest of the year I can’t quite remember.

Surprisingly, I was approached by a government agency to work in intelligence, which just shows how shoddy government recruitment was back then.  However, it turned out to be very boring and I don’t like vodka martini.

Craving excitement and adventure, I ended up as a PR consultant, which is the fate of all journalists who haven’t won a Pulitzer Prize, and I’ve still to listen to Oh, Mein Papa.

I am married with two grown-up children and live in East Lothian.   And that’s about it.