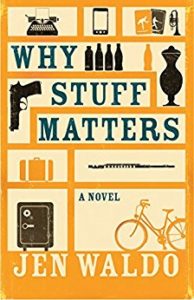 #GuestPost – I Love Words by Jen Waldo, author of Why Stuff Matters @ArcadiaBooks

I’m so pleased to be posting today about Jen Waldo’s latest book, Why Stuff Matters. As part of the promotion for the book I have a fabulous guest post from Jen and I’d like to thank Alice from Arcadia Books for asking me to be involved. First of all, here’s what the book is about:

I Love Words by Jen Waldo

Coming awake on the tail of the night’s final dream, I shuffle through the dark house and settle in front of my laptop. I don’t get right to work. I rehydrate as I check my emails. We have a family chain and I usually hear from one of the kids. I reply to whatever needs a response, then dig in.

When I first started writing, every letter on the screen was so precious to me that I couldn’t bear to fully delete anything. If I had to exchange one word for another, I’d carve out the unwanted letters and work around the common letters, salvaging every letter from the old word that I could.

Eventually I realized that anything I deleted could be written again. These days if a word or phrase has no value, out it goes.

I begin by scanning a portion of what I wrote the day before, a catch-up. Sometimes I’ll get caught there, correcting and rewriting. If a sentence is convoluted or vague I ask myself what is it, exactly, that I’m trying to say, which always leads to clarity through simplification. Other times I’ll move on, writing for an hour before skidding to a mental halt. At this point, I usually have a plan for what comes next, but I need to think about how I’m going to write it.

So instead of pushing on, I spend some time cleaning up what I just wrote. While the most important step is registering the ideas, the next step is fixing mistakes, most of which are typos, which disturb me on an OCD level because they’re infinite, ineluctable, and wrong.

After a while, I close my laptop for the day and wander into the kitchen for breakfast. Though I’m not at the computer anymore, I haven’t quit writing. In my case, seventy percent of writing is mulling, fifteen percent is typing, and the other fifteen percent is editing. So throughout the day I ponder; and the next morning I’ll write it up.

I also spend an hour a day reading. It’s vital to have words churning through. I recently asked a fellow writer what she was reading, and she told me that when she’s involved in a project she doesn’t read other authors because she feels her own narrative voice might be influenced. I disagree with her premise. For one thing, as it’s been years since I wasn’t writing something, if I applied her principle I’d never read again. And for another, how can someone who writes not love to read? Also, if the author is good, why not be influenced? It’s wise to know who the literary champions are and what they’re writing.

In the last six weeks I’ve read some brilliant novels—A Gentleman in Moscow by Amor Towles; Beartown by Fredrik Backman; and Lincoln in the Bardo by George Saunders. I can’t see how reading these works could do anything except make me a better writer, as well as a better person.

During the Q&A after a reading, a mother asked what I thought was the best way to teach children to write.

“You read to them from the moment they’re born,” I told her, with what she probably perceived as too much passion. “You tuck them into your sides and hold them close and read to them when they’re two and five and seven. You sit with them as they read to you. You make words a part of their lives and writing will come naturally.”

Thank you so much, Jen, for such a lovely post about reading and writing. Jen Waldo lives in Texas, where her novels are set. She took up writing years ago when, living in Cairo, she had difficulty finding reading material. Since then she has joined writers’ groups in Holland, Scotland, England, the US, and Singapore. She’s earned an MFA, has been published in The European, and has been shortlisted in a competition by Traveler. Why Stuff Matters is her second novel. Her debut novel, Old Buildings in North Texas, is also published by Arcadia Books. Visit Jen at jenwaldo.com