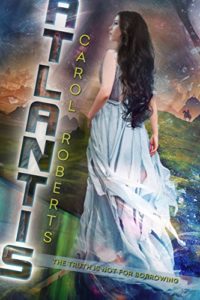 I’m delighted to welcome Carol Roberts to my blog today with a guest post all about Atlantis. She’s written a book with the same title and here’s what it’s about:

When Alanthea, high-priestess of Atlantis, connects to a woman in her dreams, she becomes haunted by a mystery. Compelled to trace the other woman’s life she finds coded poems that hold clues to the predicament of her people. Now she has to venture ever farther into forbidden territory to link past and present, and understand the real danger threatening Atlantis.

Arakon always thought of himself as an orphan, a loner without any real belonging. But after a strange encounter his life changes, and he is drawn into events beyond his control.

They move parallel in their search for answers until their destinies converge, and the weave unravels. Yet what they finally uncover lies deep at the heart of collective evolution, and what has been set in motion cannot be undone.

Here are the Amazon.co.uk and Amazon.com buy links you need.

The idea of a lost, but highly advanced civilization has captured the interest of people for centuries, perhaps the most compelling of which is the story of Atlantis.

The name Atlantis appears first in a book written by Plato in 355 B.C, telling of a powerful empire located to the west of the “Pillars of Hercules” (what we now call the Strait of Gibraltar) on an island in the Atlantic Ocean about 9000 years ago. It had been established by Poseidon, the God of the Sea. Poseidon fathered five sets of twins on the island. The firstborn, Atlas, had the continent and the surrounding ocean named for him. Poseidon divided the land into ten sections, each to be ruled by a son, or his heirs. Ultimately the story ends with giant waves rolling over its shores and sinking it, leaving behind but a myth.

If we make the assumption that Atlantis was a real place, it seems logical that it could be found west of the Strait of Gibraltar near the Azores Islands. In 1882 a man named Ignatius Donnelly published a book titled Atlantis, the Antediluvian World. Donnelly had come to the belief that Plato’s story represented actual historical fact. However, modern scientific surveys of the bottom of the Atlantic Ocean show that it is covered with a blanket of sediment which must have taken millions of years to accumulate. There is no sign of a sunken island continent.

There are other discrepancies as well. In Plato’s own words, the existence of Atlantis dates back 9000 years.  Following mythical chronology it may be said that the Greek historical legends extend from ca. 1900 BC to ca. 1000 BC. So the Greek gods like Poseidon and his sons, said to have created Atlantis, did not exist 9000 years ago. What brought the story into the timeframe of ancient Greece was the eruption of the Santorin Volcano sometime around 1450 BC, causing a tsunami that destroyed Minoan Civilization. Minoan Crete has since been associated with the mythical Atlantis, but again, this does not match Plato’s story.

Around 9000 years before Plato, at the end of the last Ice Age, a sudden, cataclysmic event that was from then on called ‘The Great Flood’ did indeed happen. Because of the magnitude of the destruction, it would have left an indelible and permanent mark on the minds of any survivors. This story would have been told and retold, passing down from generation to generation, embedded in many cultures and beliefs. Plato’s account, as well as Biblical accounts of a pre-flood civilization, tell of a ‘punishment by the gods, destroying mankind for its wickedness.’

Plato was a philosopher who had planned to write a trilogy of books discussing the nature of man. With only the book of Atlantis completed, it remains a speculative question if he had indeed intended to document a real event that happened in a long-ago past. In my opinion, Atlantis offers itself as the perfect setting to write an in-depth tale that expresses thought-provoking values and symbolic meanings important to mankind. Carol Roberts is an author and member of the Visionary Fiction Alliance. She writes visionary/metaphysical genre cross fantasy. She is also a free lance writer with particular interest in cultural myth. Originally from Vienna, she has spent all of her adult life in the Far North of New Zealand. Her work took her to several different countries, where she indulged her fascination with stories, particularly those dealing with the creation of man. ‘Atlantis’ is her first full length novel; speculating on concepts of the human condition, the meaning of individual and collective destiny, and choices.