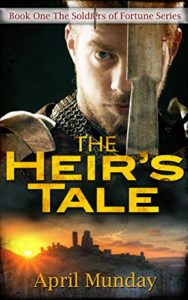 I’m delighted to welcome April Munday to Short Book and Scribes today. She’s the author of The Heir’s Tale which is book 1 in The Soldiers of Fortune series.

Four brothers – one battle that changes everything

When Ancelin Montfort returns to England with the body of his brother after the battle of Poitiers, his only thought is to see the woman he has loved since he was a boy. Unfortunately, she is his brother’s widow and he is already betrothed. The knowledge that he is now his father’s heir weighs heavily on Ancelin, and his intended wife is part of that burden.

Emma was betrothed to Ancelin shortly before he went to France. There has been no communication between them for almost two years and the man who has returned from war is not the cheerful man who left her.

Days before their wedding is due to take place, Ancelin comes to believe that Emma has betrayed him. He has a choice. Should he believe and marry the woman he loves or the woman his father has chosen as his wife?

So where does April’s inspiration come from? Read on….

Back in the 80s I visited Blists Hill Victorian Town in Shropshire. It’s part of the Ironbridge Gorge Museums and has many buildings which have been transported from their original locations and put into the town. When you go into the museum you can exchange your modern money for Victorian money in a bank and you can buy things in the Victorian shops. There’s a bakery, a chemist, a pub, a printer and a candle-factory. These were all fun, but the thing that made the greatest impression on me was one of the cottages. Rather, it was the garden of one of the cottages. It was a small garden, with a mix of flowers and vegetables. What struck me was the garden fork left standing upright in one of the beds, just as I leave mine when I go indoors for a cup of tea, or sit down in a garden chair for a breather, or do something in another part of the garden.  Someone only does that when they’re going to be back soon to finish off the job.

Such a simple thing, but it made me realise that the people of the past were real. They worked in their garden as I worked in mine. When I came to look at the Middle Ages again, I found that I wasn’t particularly interested in the kings and queens, although they were important. What I wanted to know was what ‘the man in the street’ was doing and I started to find out. I’m fortunate in that I live very close to what was a fairly large medieval town. Some of the medieval walls and gates are still here. There are medieval buildings which I can enter and which give me a greater understanding of how people lived. I used to believe that secrets could be spoken in a medieval house, but I went upstairs in one and I could hear every word of a conversation in the room below. That’s an inspiration for a novel on its own.

These days there are plenty of books written about everyday life of people in the Middle Ages. I can find out which plants grew in their gardens and I can read about what they ate. I know what a reeve did and why a man might not want to have such an exalted position. I understand why women, and not men, brewed beer and why spinning woollen thread was so important that people span as they walked along. Not all of these things find their way into my books, but they’re in my head as I create the world in which my heroes and heroines meet and fall in love.

Fabulous, thanks so much, April. It’s so interesting to find out how people lived in the past and I love the sound of that Victorian town.

April Munday is the author of romances set in the fourteenth century. She lives in Hampshire, where many of her stories are set.  In her head she lives in the fourteenth century, but only in her head. She has learned far too much about life in the Middle Ages to want to live there in reality.  She is inspired by the remnants of the past which are part of her local landscape.