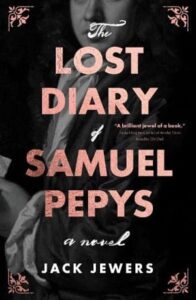 It is the summer of 1669 and England is in dire straits.

The treasury’s coffers are bare and tensions with the powerful Dutch Republic are boiling over. And now, an investigator sent by the King to look into corruption at the Royal Navy has been brutally murdered. Loathe to leave the pleasures of London, Samuel Pepys is sent dragging his feet to Portsmouth to find the truth about what happened.

Aided by his faithful assistant, Will Hewer, he soon exposes the killer. But has he got the right person? The truth may be much more sinister. And if the mystery isn’t solved in time, then England could be thrown into a war that would have devastating consequences . . .

The diaries of Samuel Pepys have enthralled readers for centuries with their audacious wit, gripping detail, and racy assignations. Pepys stopped writing at the age of 36. Or did he? This action-packed historical thriller, described as “Bridgerton meets Sherlock” imagines what might have happened next.

Historical murder mystery and crime caper The Lost Diary of Samuel Pepyshas already had pre-publication praise from: Woman & Home saying: “Think Pirates of The Caribbean meets Charlie’s Angels. Spirited writing, vibrant characters, visceral backdrops and swashbuckling action all play out in this thrilling mystery.” While Culturefly have selected the book for one of their must-read summer novels saying: “Bridgerton meets Sherlock, this has everything a good crime thriller should have: murder, intrigue, adventures, and sinister truths. If you enjoy historical detective fiction, it should be at the top of your summer reading list.”

The world’s greatest diarist Samuel Pepys witnessed some of the most dramatic events in English history, from the return of Charles II – the Merry Monarch – to the horrors of the Great Plague and the Great Fire of London. Pepys put his pen down for the last time in the early summer of 1669 aged 36, or did he? Jack Jewers’ inventive crime caper, The Lost Diary of Samuel Pepys imagines what happened next.  A brilliant storyteller through film, Jack Jewers has had his work premiered at dozens of international film festivals, including Cannes, New York, Marseille & Dublin, and turns his hand to writing for the first time this year.

It was an hour after midnight and the whorehouse was on fire.

I was woken from a slumber by shouting from somewhere down the corridor. My head was light from wine and the pleasures lately taken. I looked around, but there was no sign of the girl who had been here when I shut my eyes. The last I could remember was her going to fetch more wine.

Then I caught it on the air. The smell of burning.

I slid from the canopied bed and immediately stumbled across the floor, my legs caught up in the shirt that hung down over my bare legs. I felt for my boots.

The noises from the corridor grew louder. Panicked screams and the pounding of feet along the old wooden floorboards. I pulled on my boots as quickly as I could, my eyes straining to see in the near- darkness. Then, picking up the small clay oil lamp that provided the room’s only illumination, I grabbed my little satchel and opened the door.

A cloud of acrid smoke stung my eyes and filled my lungs, causing me to choke. Figures ran past the doorway, shapes in the billowing smoke, their flickering lamps floating by like spectres.

Holding my arm to my mouth, I forced myself out into the corridor. All around I could hear screams of panic. People jostled against me, desperate to reach the staircase and the safety of outside.

In the crush, the lamp was knocked out of my hand and it shattered on the floor. A lick of flame from the spilled oil ignited a pair of silk curtains.

The smoke was growing thicker by the moment. I could hardly see a thing. All I could do was run with the crowd and pray that they knew their way around the building better than I did.

We rounded a corner and all of a sudden, the air cleared a little. I could make out an open space with a tall ceiling, the glint of gilded walls, and a skylight through which the moon illuminated the hazy air. I recalled going through an atrium as the girl led me to her chamber. That meant we were on the top floor, with three storeys between us and the safety of the street.

‘This way.’ Mother Quick stood at the top of a wrought-iron staircase, holding a lit candelabra. Her pink silk gown was dishevelled and torn down one side, her tall wig tilted askew.

‘Move!’ she repeated, as a crush of men and women ran past me and down the stairs. Only now could I see that some of them were naked.

‘Have you seen Mr Hewer? The man I came in with. I must find him.’

She thought for a moment, sweat making rivulets through her thickly powdered face.

‘He was at cards in the parlour. You’ll find him outside. Now go.’

A great billow of black smoke made us both choke. We held on to each other, gasping for breath.

It was then that we saw them.

Jack Jewers is a filmmaker and writer, passionate about history. His career has been spent telling stories in all media, and his body of work includes film, TV, and digital media. His films have been shown at dozens of international film festivals, including Cannes, New York, Marseille, Dublin, and London’s FrightFest, garnering multiple accolades, including an award from the Royal Television Society and a nomination for Best Short Film by BAFTA Wales. The Lost Diary of Samuel Pepys is his first novel.