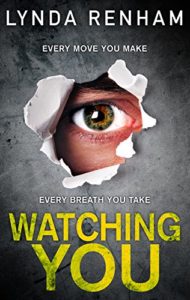 I’m delighted to be helping to celebrate the publication today of Watching You by Lynda Renham. Just look at that creepy cover! I have an extract to share with you from the prologue but first, here’s the very ‘to the point’ blurb:

Ewan Galbreith is out of prison. Libby Owen is scared. Fifteen years earlier she saw Ewan murder her aunt and uncle with their own shotgun, and now he’s coming for her.

You can buy a copy now at a special price for a limited time from Amazon UK or Amazon US. Her bare feet pounded the gravel, the sharp stones cutting mercilessly into her skin. The wind whipped cruelly at her hair and played with her new chiffon dress until her legs became entangled within it. She pulled herself free from the material without once slowing her pace, her heart drumming in her chest. She could hear the blood pulsating in her ears like a wild war dance. Her scalp tingled. Something had touched her. She fought back a scream. It was a branch, just a tree in the blackness of the night. Keep going. She couldn’t stop. A firework boomed and lit up the night sky. She tripped, scattering the detestable gravel. A small sob escaped her lips before she dragged herself up and continued on. He’d seen her. He’d seen her. That’s all she knew.  Keep running. Don’t look back. An orchestra of colours exploded in the sky and lit up the tall iron gates of Greystone Hall ahead of her. She thought back to the house and nausea rose up in her gut. Soon she would smell the pungent odour of seaweed. Her heart beat a steady rhythm now. She knew the beach wasn’t far away. Excited voices and the sound of drunken laughter broke through her pulsating eardrums. People were partying on the beach. It was the beginning of something new, something exciting, a new start.

She tripped in her haste to reach them. Her mouth connected with cold sand, it scratched her skin.

There was laughter from a small group huddled around a camp fire.

‘Hold on,’ said another. The voice concerned.

She felt someone touch her.

‘Call the police,’ yelled another.

There was scuffling and someone wrapped a coat around her. It was warm and comforting.

‘Christ, what happened?’ he said.

‘Someone shot my Aunt and Uncle,’ she moaned, trying to get up. She couldn’t. She was exhausted.

Ooh, sounds so good, doesn’t it?

You can also check out Lynda’s other thrillers by clicking on the covers. Lynda Renham is author to many popular romantic comedy and gripping psychological thriller novels. She lives in Oxford, UK. She has appeared on BBC radio discussion programs and is a prolific blogger, Twitter and Facebook contributor.