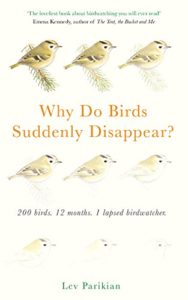 I’m so pleased to be posting today as part of the blog tour for Why Do Birds Suddenly Disappear by Lev Parikian. I’d like to thank Lev for asking me to be a part of it. It looks like a really wonderful book and if you’d like to get yourself a copy then it’s available from tomorrow on Amazon and Hive.

Lev has written a lovely guest post about Enthusiams, but first let’s have a look at what the book is about:

At twelve years old, Lev Parikian was an avid birdwatcher. He was also a fraud, a liar and a cheat. Those lists of birds seen and ticked off? Lies. One hundred and thirty species? More like sixty.
Then, when he turned fifty, he decided to right his childhood wrongs. He would go birdwatching again. He would not lie. He would aim to see two hundred species of British bird in a year.

Why Do Birds Suddenly Disappear? is the story of that year, a story about birds, family, music, nostalgia, the nature of obsession and obsession with nature. It’s about finding adventure in life when you twig it’s shorter than you thought, and about losing and regaining contact with the sights, sounds and smells of the natural world.

It’s a book for anyone who has ever seen a small brown bird and wondered what it was, or tried to make sense of a world in which we can ask, ‘What’s that bird?’ and ‘What’s for lunch?’ and get the same answer.

I had many enthusiasms as a child. There was plenty of time for them back then, of course, what with nothing having been invented yet.

Here are some of them:

Time passed, and enthusiasms waned, to be replaced by new ones. Music, girls, astonishing levels of indolence.

My reading habits developed, but not that much. Peanuts, Asterix and Tintin were replaced by P G Wodehouse, Douglas Adams and Dick Francis, all of whose work I read to the exclusion of pretty much anything else, including my ‘O’ and ‘A’ level set texts (especially Dickens, who as a teenager I found indescribably tedious).

Cricket remained a constant, but birds, the other overriding enthusiasm of my youth, faded away. I’m at a loss to explain why. Maybe I just sort of forgot.

And then back it surged, triggered by I don’t know what exactly. Perhaps it was simply the onset of middle age. Perhaps the reasons are more complex than that, something to do with being comfortable enough in my own skin to rediscover the childlike wonder of my youth.

Or perhaps I’m overthinking it.

I did two things to mark this unstoppable resurgence of enthusiasm.

I went birdwatching. A lot.

And I wrote a book about it.

Thank you so much, Lev, for such a great guest post. I remember doing a few of the things in your list too, but alas there was no birdwatching in my youth. Lev Parikian is a conductor, writer and hopeless birdwatcher. His first book, Waving, Not Drowning, was published in 2013. His numerous conducting credits include the re-recording of the theme tune for Hancock’s Half Hour for Radio 4. As a birdwatcher, his most prized sightings are a golden oriole in the Alpujarras and a black redstart at Dungeness Power Station. Lev’s book, Why Do Birds Suddenly Disappear?, can be bought on Amazon or Hive. He is currently crowdfunding his second Unbound book, the long and the short of it, a collection of forty pieces of writing in which the readers get even more control of the process by supplying subjects for Lev to write about.