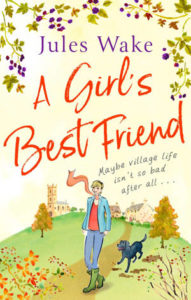 Welcome to my stop on the blog tour for A Girl’s Best Friend by Jules Wake. I’m so pleased to have a guest post by Jules to share with you today and would like to thank Millie Seaward from Little, Brown for asking me to be a part of the tour.

Welcome to your new cottage in the country – complete with grumpy vet, village gossip and a very muddy dog . . .

City girl Ella wants to take refuge in the country, lick her wounds and work out what she’s going to do with the rest of her life. She certainly doesn’t want to have a four-legged house guest or anything to do with village life. Unfortunately, the inhabitants of Wilsgrave have other ideas.

Settling in to her godmother’s house for a few months of R&R, Ella finds herself the reluctant babysitter of a badly behaved Labrador – and her plans of staying mainly indoors scuppered. But as she’s forced into wellies and into the village’s way of doing things, Ella meets people who make her think again about what she really wants out of life and love, starting with her new furry best friend . . .

Hello everyone and thank you for having me here.

A Girl’s Best Friend is my tenth book and one that is very close to my heart because it’s the first one I’ve set in my local area.

I’m lucky enough to live in a small market town in the Chilterns, the rolling hills of which I’ve come to love. I grew up in Yorkshire, so when I first moved here, I missed what I thought of as the ‘proper’ hills of the Dales, but over the years I’ve really come to appreciate the landscape of the beautiful area in which I live.

Writing this book gave me an opportunity to pick some of my favourite places and now I look back I can see that I used those settings for some of the pivotal scenes. Wendover Woods, which is just over the border in Buckinghamshire, is where we first meet my heroine Ella and learn the depth of her misery at being exiled to the country. The damp, drizzly woods with the smell of musty old leaves feels totally alien to her and illustrates just how unhappy she is. However despite her antipathy I highly recommend it for a good Sunday walk!

Another of my favourite places, Ivinghoe Beacon one of the highest places on the Chilterns, which looks out over Hertfordshire and Bedfordshire, all the way to Oxford, is where Ella reveals the source of her true heartache. It’s a windswept, slightly barren hillside which perfectly matches her ravaged emotions.  And if I was in any doubt as to the suitability of the landscape for the scene I was reassured when the very same spot  recently doubled as an alien planet in Star Wars. (Our local Facebook page was full of pictures of Chewbacca under an umbrella on that very hillside.)

One of my favourite and another important scene was set on the edge of Wilstone Reservoir, featuring a runaway dog, illicit fishing and artistic inspiration, but to find out more you’ll have to read the book.

It was great fun writing this book and I realised as I was writing about these places that I don’t spend enough time getting out and exploring my local area.  My autumn’s resolution is to get out and find some new hidden treasures and find some new favourites but in the meantime I hope you’ll enjoy exploring the Chiltern Hills with my characters.

Thank you, Jules. All of these places sound absolutely lovely and I hope you find the time to visit them some more. Jules Wake’s earliest known declaration that she planned to be a writer came at the age of ten. Along the way she was diverted by the glamorous world of PR and worked on many luxury brands, taking journalists on press trips to awful places like Turin, Milan, Geneva, Paris, Brussels and Amsterdam and occasionally losing the odd member of the press in an airport. It gave her the opportunity to eat amazing food, drink free alcohol as well as providing opportunities to hone her writing skills on press releases and to research European cities for her books.

Eventually the voices in her head persuaded her it was time to sit down and write the novel she’d always talked about. Her debut novel, Talk to Me in 2014, was quickly followed by the bestselling From Italy With Love, published by HarperImpulse, which reached the top ten in the Amazon Kindle charts. Since then she has had seven further novels published.