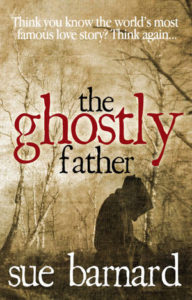 Sue Barnard is celebrating The Ghostly Father’s book birthday with a blitz for today only and I’m delighted to be helping her by sharing a fabulous guest post. There’s also a chance to win a copy of the book. My thanks to Rachel Gilbey from Rachel’s Random Resources for the place on the tour.

Was this what really happened to Romeo & Juliet?

Think you know the world’s most famous love story?  Think again.  What if the story of Romeo & Juliet really happened – but not quite in the way we’ve all been told?

This part-prequel, part-sequel to the original tale, told from the point of view of the Friar, tells how an ancient Italian manuscript reveals secrets and lies which have remained hidden for hundreds of years, and casts new doubts on the official story of Shakespeare’s famous star-crossed lovers.

If you love the Romeo & Juliet story but are disappointed with the way it ended, this is the book for you.

If you include those compulsory “Composition” exercises at school, I suppose I’ve been dabbling with writing for as long as I can remember: short stories, poems, articles, and the occasional stroppy letter to The Times. But it wasn’t until around fifteen years ago, following a life-changing event which could easily fill an entire book on its own, that I began to take my writing more seriously.  That was when I set myself the challenge of writing a full-length novel.

The eventual result was The Ghostly Father – a new take on the traditional story of Romeo & Juliet, but with a few new twists and a whole new outcome.  The novel is told from the point of view of the Friar, and is a sort of part-prequel, part-sequel to the original tale.

At the time, I never had any plans for publication.  I was writing the book just for myself, to give the story the outcome I’ve always wanted.  But a friend who read the first draft suggested that I ought to take it further.  When I received an email from Crooked Cat Books offering me a contract, I had to print it out and read it four times before I could convince myself that I hadn’t imagined the whole thing.

The Ghostly Father was officially released on St Valentine’s Day 2014.  Following reversion of rights four years later, a slightly revised edition has now been issued under a new imprint (Ocelot Press, a co-operative of independent authors publishing together).

The Ghostly Father was originally written in response to the prompt Write The Book You Want To Read.  I’ve always loved the story of Romeo & Juliet, but have never been happy with the way it ended.  The book I’ve always wanted to read is the alternative version of the story, in which Shakespeare’s star-crossed lovers don’t fall victim to a maddeningly preventable double-suicide.

Why, I asked myself, should there not be such a book?  And the answer came straight back: Why not indeed?  And if it doesn’t exist, then go ahead and write it.

This is perhaps the most difficult question, because I don’t really know the answer.

I can sit and stare at a blank screen for ages and nothing happens.  Ideas and inspirations often appear when I least expect them – usually when I’m away from my computer and doing totally unrelated tasks, such as sorting out the laundry or mowing the lawn.  On one occasion, an entire stanza of a poem arrived, fully-formed, when I was sitting in a traffic jam.

Sometimes the characters themselves take over the process.  When I was writing my second novel (Nice Girls Don’t), at one point I looked down at the screen to find that the hero had said something which I had no recollection of having written, but which went on to change the entire course of the story.  It was frustrating at the time, but I realised afterwards that he was quite right.  My original idea would never have worked.

Maybe the wonder is not how it happens, but that it happens at all…

*Terms and Conditions –UK entries welcome. Please enter using the Rafflecopter box below. The winner will be selected at random via Rafflecopter from all valid entries and will be notified by Twitter and/or email. If no response is received within 7 days then Rachel’s Random Resources reserves the right to select an alternative winner. Open to all entrants aged 18 or over. Any personal data given as part of the competition entry is used for this purpose only and will not be shared with third parties, with the exception of the winners’ information. This will collected to the giveaway organiser and used only for fulfilment of the prize, after which time Rachel’s Random Resources will delete the data. I am not responsible for despatch or delivery of the prize. Sue Barnard is a British novelist, editor and award-winning poet.  She was born in North Wales some time during the last millennium, but has spent most of her life in and around Manchester.  After graduating from Durham University she had a variety of office jobs before becoming a full-time parent.  If she had her way, the phrase “Non-Working Mother” would be banned from the English language.

Sue speaks French like a Belgian, German like a schoolgirl, and Italian and Portuguese like an Englishwoman abroad.  She is also very interested in family history.  Her own background is far stranger than any work of fiction; she would write a book about it if she thought anybody would believe her.