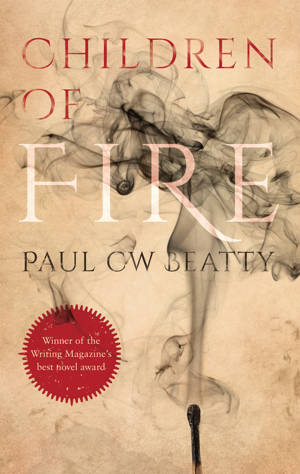 I’m delighted to welcome Paul CW Beatty, author of Children of Fire, to Short Book and Scribes today with a guest post about ‘Writer’s Block’. My thanks to Rachel Gilbey from Rachel’s Random Resources for the place on the book birthday blitz.

Can Josiah solve the puzzle before more people die, or is he out of his depth?

In 1841, at the height of the industrial revolution in the North West of England, Josiah Ainscough returns from his travels and surprises everyone by joining the Stockport Police Force, rather than following his adopted father’s footsteps into the Methodist ministry.

While Josiah was abroad, five men died in an explosion at the Furness Vale Powder Mill. Was this an accident or did the Children of Fire, a local religious community, have a hand in it. As Josiah struggles to find his vocation, his investigation into the Children of Fire begins. But his enquiries are derailed by the horrific crucifixion of the community’s leader.

Now Josiah must race against time to solve the puzzle of the violence loose in the Furness Vale before more people die. This is complicated by his affections for Rachael, a leading member of the Children of Fire, and the vivacious Aideen Hayes, a visitor from Ireland.

Can Josiah put together the pieces of the puzzle, or is he out of his depth? Children of Fire won the Writing Magazine’s Best Novel Prize for 2017

‘If you don’t get up now, you’ll be late for school and have to parade in with the lazy kids!’ My mum is screaming at me from the bottom of the stairs. I sit bolt upright, sweat pouring from my forehead, but its not my old bed in my small bedroom in Birmingham, but my comfortable bed in Marple, near Stockport.

I’ve had lots of students since then, where I’ve acted as their supervisor and mentor. Oh, I didn’t say did I? I am or rather was a research scientist working in the NHS and University, until a few years ago I turned to my second love, writing and did an MA in Creative Writing at Manchester Metropolitan University.

Since then I’ve been writing seriously, and after several novel efforts later, Children of Fire emerged. It won a prize, was published, and this is its anniversary. Hence, this Blog Tour

It sounds all very trite, even a bit off putting, but its true. And to get the book done I had to apply to myself an adage I often offered to students, reluctant to put pen to paper literally or metaphorically: Don’t get it right get it written! There is as far as I’m concerned no such thing as Writer’s Block. Oh, there’s plenty of occasions when I’ve gone for a cup of coffee, to put off a difficult bit. But deadlines are deadlines especially if its a deadline from a publisher. The sort of final demand: Get the final proof to me now or else! Or the much colder but much more compelling final submission date for a research grant application.

The Don’t get it right get it written! adage contains two interpretations.

​If you don’t get it written, how can I help you get it finished? That’s supervisor to student. And its true, you can’t judge a piece of writing unless it’s available in print on the page.

​The second is you’ll never get it completely right so you’ll have to compromise so submit when you can bear to!

In this Blog Tour I’m inviting you to read Children of Fire, to make your own minds up. Of course I hope you’ll like it but I did get it written so I hope you’ll get it read!

Thank you so much, Paul! Don’t get it right, get it written seems like a really good place for any writer to start. Paul CW Beatty is an unusual combination of a novelist and a research scientist. Having worked for many years in medical research in the UK NHS and Universities, a few years ago he took an MA in Creative Writing at Manchester Metropolitan University emerging with a distinction.

His latest novel, Children of Fire, is a Victorian murder mystery set in 1841 at the height of the industrial revolution. It won the Writing Magazine’s Best Novel Award in November 2017 and is published by The Book Guild Ltd.

Paul lives near Manchester in the northwest of England. Children of Fire is set against the hills of the Peak District as well as the canals and other industrial infrastructure of the Cottonopolis know as the City of Manchester.