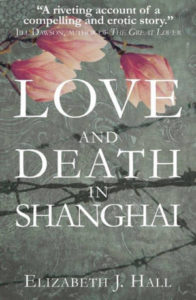 I’m delighted to welcome Elizabeth J. Hall, author of Love and Death in Shanghai, to Short Book and Scribes today. I’ll be quizzing her about the book and her writing. I’d like to thank Anne Cater from Random Things Tours for the place on the blog tour.

Shanghai 1924. Sam Shuttleworth joins the Municipal Police looking for adventure and to escape his working class roots in Lancashire. Shanghai is a glamorous, fascinating place – with an extremely dangerous criminal underworld. Sam rises through the ranks and marries his glamorous Russian lover Lulu, but the relationship is tumultuous, with infidelities on both sides.

In the 1930s, as Japan invades China and moves into Shanghai with appalling violence, Sam has to negotiate between warring sides, and wonders if he will ever find peace amidst the chaos of his relationships and the bloody events of his career.

1. The inspiration behind Love and Death in Shanghai is fascinating. Could you tell me more about it please?

The inspiration behind Love and Death in Shanghai IS fascinating. It stems from a first memory when I was about 4 of my mother opening a telegram and bursting into tears. It was to say that her beloved brother had been killed in Shanghai. He was an inspector of police in the Shanghai “Badlands” having worked his way through the ranks between 1924 and 1942. He was from working class Lancashire, like me, and I knew that he must have seen the horrors of Shanghai history and violence, as well as enjoying the good life. My mother had been unable to trace a wife and child who were in a Japanese camp from 1943 to 1945. I wanted to know more, and found it.

2. The book has Sam Shuttleworth joining the Municipal Police in Shanghai in 1924. How much research did you have to do into the police and what the city was like then?

I had to do a lot of research and one piece led to another. I tracked Sam, as best I could, through archives in Kew, in Washington for newspapers of the time and in Shanghai itself for police records and more newspapers. I read a number of books about the history of Shanghai and descriptions of the city, and watched old films about characters and situations.

3. Can you tell me more about how you became a writer?

I became a writer because I have always been fascinated by how the written word conveys so much. I have come late to putting down words of my own, but the idea of writing has come and gone in my life many times.

4. And if you weren’t a writer what do you think you would be doing now?

I am a part time writer and have to find a balance between writing and being in politics. It can be difficult!

5. This is your first full length novel, but you have previously written short stories. How did you find the process of writing a novel compared to your previous writing experience?

Short stories were my first attempt at writing fiction. They are intense, precise and need a lot of polishing. A well know writer once said of short stories “you can’t make mistakes.” That, I think, is well said.

I do some plotting of stories then just write and see where it takes me. I do a lots of slashing, re-writing and polishing, sometimes just to find one, right word.

When I am writing , I like to start at about 6am with an enormous cup of tea by the computer. I cannot write when I have a number of political issues around, and I have learned to wait until that stops and I can be creative. I write in my study at the top of the house and often see dawn rising above the hills surrounding Lewes in Sussex.

I read a lot. I think that inspires me. I read a number of women authors – mainly American and British. I read, by men and women, short stories, novels and, inevitably, newspapers.

Writing quirks include an enormous cup of tea to start the day and often exercises based on yoga and tai ‘chi or meditation before I begin to write.

10. What are you planning to write next and where will it take us?

I am planning to produce a volume of short stories. There will be different themes around exploring love, mistakes, regrets and reconciliations.

Thank you so much for answering my questions, Elizabeth. Elizabeth J.Hall works in politics in the UK. Love and Death in Shanghai, her debut novel was inspired by the life and death of her uncle who worked in the Shanghai Municipal Police in the 1920s and 30s. Elizabeth’s first memory is of her mother crying when she received a telegram reporting his assassination.

Elizabeth lives in East Sussex with her husband. After a degree in French, she trained as a teacher with a particular interest in social and health education. She worked in the USA, West Africa and London before becoming a consultant, developing programmes of health education abroad, including Central Asia and Russia.