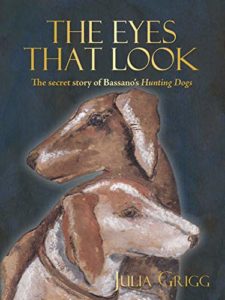 Welcome to my stop on the blog tour for The Eyes That Look by Julia Grigg. I’m delighted to be sharing a Q&A with Julia with you today. My thanks to Bookollective for the place on the tour.

We may have eyes that look – but how clearly do we see?

This compelling novel of art and adventure, Julia Grigg’s debut, is set in the feverish creativity of mid-sixteenth century Italy. Francesco Bassano wants to find out how and why an extraordinary painting was made; the story traces his quest to discover the secrets of the portrait’s past. Francesco’s journey, his coming-of-age, takes him and his questions to Venice, Verona, Maser and Florence. Encountering the High Renaissance’s masters Titian, Veronese and Vasari in the very act of creating and recording the era’s stupendous art and architecture, he is witness to astonishing achievements. Enthralled, he learns of the determination needed for innovation and the sacrifices demanded of an artist if cherished ambition is to become reality. Little by little he unravels what lies behind the painting, gaining new understanding of love, truth and beauty, and of loyalty, devotion and the unbreakable bond between a master and his dogs. However, in delving deeper, the past’s dark side reveals itself: cruelty, inhumanity and human frailty – and Francesco cannot avoid the experience of bitter betrayal.

A spirited, entertaining fiction drawing on historical facts, The Eyes that Look is multi-sensual in its storytelling, inviting readers to revel in the unrivalled artistic riches of the Italian Renaissance.

1. Where do you draw your inspiration from?

2. Do you have any unusual writing rituals?

Is procrastination a ritual? ie attending to relatively inconsequential things instead of buckling down to the task? I tend to dally until I’m reaching the limit of the time I have available then somehow I creep up sideways to the writing to take it unawares and jump into it.

Once started, I usually don’t want to stop and I’ll push on regardless of the clock. I wrote the first draft of ‘The Eyes that Look’ in three intense bursts of activity, amounting in total to about twelve weeks.

3. Where’s your favourite place to write?

At my desk overlooking the garden, preferably with the door open so I can hear the birds and the dogs can run in and out.

4. Who is your favourite character from one of your books and why?

From ‘The Eyes that Look’ it is Giorgio Vasari, the polymath and art historian. He was a driven personality, an outsider who rose to prominence through applying vast reserves of energy and ingenuity to tasks. He was complex, with a huge ego, wicked sense of humour and unerring instinct for a story’s juicy details even if they didn’t match up with the facts. His way of categorising artists’ achievements still determines how we think about art history today.

5. How do you get yourself in the mood to write?

I’m always googling and reading round the different aspects of the novels’ subject and themes. Coming across relevant material during my researching is always a good prompt…that aha! moment when I can see how to make one piece fit with another, or to add a nuance here or there.

6. If you could bring one of your characters to life, which one would it be and why?

I’d take Jacopo Bassano by the arm and walk him through some of the galleries where his work – and his sons’ – is prominently displayed. Obviously, first to The Louvre to see the ‘Two Dogs’ hanging to the right of the ‘Mona Lisa’. Then I’d like to see what he’d make of climbing the grand steps to London’s National Gallery where there are four of his paintings. A top moment would be to fly him to New York and show him where the painting he was still working on until his death is hung: very grandly at the Metropolitan Museum.

Why? Jacopo was so modest a personality, he stood out among many of his time in not thinking of how posterity would view him. Showing him the respect he’s held in 500 years later would be something.

7. Which author would you love to meet and why?

So inspirational. The subjects (non-fiction) he chooses are fascinating and I trust his research implicitly. He writes with enormous passion, to the extent it’s sometimes almost overwhelming. His ‘Why Homer Matters’ has pushed me towards the classics I last read at school, while his ‘The Seabirds’ Cry’ has altered forever how I feel about seagulls.

8. What are you working on at the moment?

It’s only a few days since The Eyes that Look’ was published (Oct 1) and right now I’m taken up with preparing and undertaking promotional events.

Soon though, I’ll be back to the draft of a new story that shows a different dimension to one character from ‘The Eyes that Look’. Helena Barozza, wife of the dogs’ portrait’s patron, is a little under-played in the novel, I feel. She was a woman of substance and a poet in her own right. My new story is set in the 1520s and 30s, earlier than ‘The Eyes that Look’ and my research is showing me she had a different, perhaps darker, side to her life. A sprig of Florence’s Medici dynasty, bad boy Lorenzaccio, has a significant part to play in this too

Thank you so much for such interesting answers, Julia. As a journalist, Julia Grigg has written on fashion, food, travel and the arts, subjects in which she retains an abiding interest. Recruited as a writer by UNICEF, she worked for many years as an advocate for children’s issues in some of the world’s most demanding and complex countries.

The Eyes that Look was begun while studying for the Bath Spa University Masters course in Creative Writing. The research, in Italian archives, galleries and churches, allowed her to indulge a lifelong passion for the Renaissance.

Julia is working on her second novel, also set in mid-1500s Venice and Florence, and involving some of the same cast of characters as The Eyes that Look.

Dogs are another passion; she and her husband share their home with a pair of black and tan dachshunds.