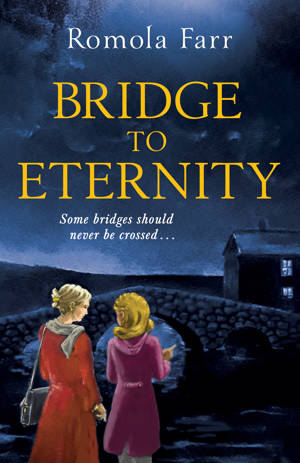 Welcome to my stop on the blog tour for Bridge to Eternity by Romola Farr. I have an author supplied Q&A for you to enjoy today. My thanks to Rachel Gilbey from Rachel’s Random Resources for the place on the tour.

Audrey, recently widowed, is not saying why she left her comfortable home in the south of England to move into an old school boarding house on the edge of a moor. Tina, a young estate agent, is concerned for Audrey’s safety as she believes the folklore about a schoolboy who never went home. Property developers, annoyed at losing a site ripe for demolition, make plans to encourage Audrey to sell. Malcolm, a charming widower, brings a welcome light into Audrey’s life until it shines into a very dark corner…

Q: Romola Farr – lovely name and unique. When we googled it, only one Romola Farr came up which must be a great plus for an author?

A: Most people don’t get to choose their name but my family helped me choose mine. I used to write scripts and plays under my real name but I wanted to reinvent myself as a novelist. The easiest way to do that was by creating a new persona. What’s in a name? Quite a lot, it seems.

A: As a debut novelist I found writing in the first person much easier than the third person. When directing a film, I can change point of view in the middle of a scene but when writing a novel, it’s important to maintain the point of view of one character during a scene or sequence, otherwise it’s confusing for the reader. It took me a while to understand that writing a novel is very different to a film script.

Q: Your novel is set in a small town, by a river and on the edge of a bleak moor – were you writing about a real place?

A: Yes, both Hawksmead and Undermere exist but I changed the names to allow me to write freely.

Q: When you had the germ of an idea for your novel – was it the story, the place or the characters that came first?

A: Looking back at my writing career, I realise now that every story started with a place. Bridge to Eternity started with a Victorian house, a narrow stone bridge over a fierce river, and a wild and beautiful moorland. I then thought about the kind of people who would live there and from them, came their stories. I think the best stories develop naturally from place and people.

Q: Some writers just start writing and see where the narrative takes them. Others like to detail every scene in advance. How do you like to work?

A: I would like to detail every scene but I can’t because I don’t know what’s going to happen. Once I’ve established the location and my principal characters, I have to let the story flow. When the first draft is completed, then I employ strict discipline in terms of what I want each scene to convey, but the actual birth is very messy!

Q: Bridge to Eternity is your first novel – do you describe yourself as an author, screenwriter or playwright? You’ve enjoyed success with all three.

A: Storyteller is my favourite description. I like creating worlds and seeing what happens.

Q: If you get the chance, would you adapt Bridge to Eternity for the screen?

A: My heart and soul is in Bridge to Eternity and although I could be tempted by a large fee, I feel that the author would be better served by a writer looking at the project with fresh eyes. Of course, I could change my mind!

A: I would like to thank all the readers and bloggers – everyone who loves books. I have family and friends who say they never have time to read a novel but who spend hours on MSN, Facebook, twitter et al – it’s snack reading. A novel is a proper meal and gourmet readers know that and feel enriched by every good novel they read. I started my working life in the theatre and was very lucky to find myself on the West End stage in a hit play at the age of 16. My career and life nearly ended there as I was knocked down by a car on the way home one Saturday night. I recovered and went on to be quite a successful photographic model. Later, when that part of my career did die, I turned to writing and made quite a good living writing screenplays, making films, and writing advertising copy for a marketing company. A few years ago I entered a short-story competition and fell in love with prose and knew I had to tell my own story within a fictional framework. At the moment I am hiding behind a nom de plume.