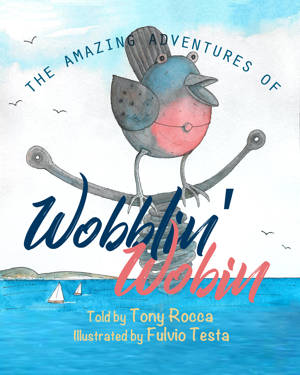 I’m so pleased to be able to share a guest post by Tony Rocca, author of The Amazing Adventures of Wobblin’ Wobin with you today, as part of the blog tour. My thanks to Faye Rogers for the place on the tour.

Meet Robin, or rather, Wobin: a metal garden ornament transported from England to the beautiful French Riviera. He’s lonely and can’t speak French. Neither can he fly, which is a bit unfortunate for a bird. This is his story about learning to fly and being brave.

Here’s the back story. My wife and I were visiting the Chelsea Flower Show one recent May and came across a garden centre on the periphery selling metal ornaments. One caught our eye behind a notice: Fat Bobbin’ Robin, £10. He was a cheeky, fat robin, perched on a curved metal twig and balanced on a bedspring which made him rock. The following day he was in our suitcase on a flight from London to Nice.

We have a rented apartment in Cannes, blessed by a lovely view of the sea but cursed by the amount of birdshit deposited on the terrace by pigeons. I have tried deploying various anti-pigeon tricks to no avail. Those beach windmills kids stick in the sand seemed like a good idea, their colourful plastic arms flailing a Keep Off warning ­– only they didn’t look quite so clever when dinner guests arrived. Similarly, I made a rather cute mobile from old CD disks that twizzled and clanked in the wind, with ditto result.  Next came a little box emitting an ultra-high frequency squeal, but that simply brought local dogs, howling, to our front door. Stretching taut strands of fishing line the length of our eight-metre balcony rail was taken by one versatile character as an invitation to tightrope-walk (giving me an “up yours” with a wing tip, I could almost swear.)

So a bird in residence, bouncing on a bedspring, seemed a great solution. Wobblin’ Wobin was born.

I was sitting at the computer in my office overlooking the scene one day, watching him wobble in the wind, when a silly thought hit me: what if he wobbled so hard he simply took wing and flew off his perch?  And what if he had some friends around him who could show him, not just the immediate neighbourhood, but guide him to extraordinary places like Cannes, Nice, or Monaco?  No, I had not been drinking.

I’ve had a fairly long career as a journalist and moved down here to freelance after extended years working for the papers in London, chiefly the Daily Mail and The Sunday Times.  So I worked the Côte d’Azur professionally and although I cannot claim to be an expert there are few places I have not written about – often feature-length articles for the travel pages.  The research was there… all I had to do was liberate my keyboard and let my imagination do the rest. Er, fly?

And I must say it’s been a pleasure. Now retired, I feel as free of the bounds of writing serious articles for newspapers wearing my Sunday best as Wobin must feel, flying his virtual reality trips up and down the coast, engaging in new adventures and coming into contact with such as the Magpie Mafia, the Man In The Iron Mask, and even Royalty in Monaco.

Freed of my straitjacket, I started writing the story with two young girls in mind: great-nieces from a British family who live in Belgium. Their French is light years ahead of mine, but I put myself in the position of an English speaker having to come to terms with a new language and have tried to make the story as appealing to French youngsters learning English as much as to native English-speaking children learning a few French words.

I was coming to the end of the story and realised that, suddenly, it had mushroomed into a proper book and was no longer just old Uncle Tony telling bedtime stories. The second light-bulb moment was that if I were to attract a publisher it had to have illustrations, and that set me off in an entirely new direction to meet Fulvio Testa, in Italy. He is one of that country’s most respected and able illustrators of children’s books and I feel honoured to have him on board as a co-conspirator. He has produced 21 lovely illustrations, one for each chapter.­­

By the way, I hear you ask, in real life does Wobin work as a bird-scarer? No, but he certainly looks happy, sitting on our terrace with a puffed out red breast, wobbling in the wind.  Maybe I should go back to the windmills.

Thank you, Tony. I love the sound of Wobin’s adventures! Tony Rocca’s writing career has spanned 30-plus years as a London journalist, notably with the Daily Mail and Sunday Times, during which time he has been a reporter, sub-editor, foreign correspondent and features editor. He has written five books and is widely travelled, having once owned a vineyard in Tuscany that brought him success as an accidental winemaker. He tells the story amusingly in his first book, Catching Fireflies (‘A welcome change in a climate of clichés’ – International Herald Tribune). A second book, Memories of Eden, concerned the Jewish community of Iraq and was equally well received. His first novel, You Send Me, followed. This new book for children, set on the French Riviera where he now lives, is a further example of his versatility as a writer.