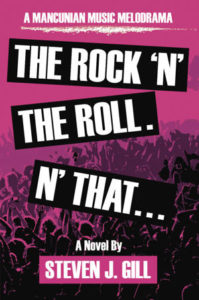 Posted on 7th February 2019 By Nicola

Welcome to my stop on the blog tour for The Rock ‘N’ Roll. ‘N’ That… by Steven J. Gill. Steven has very kindly written a post for me to share with you today about how the book came out. My thanks to Faye Rogers for the place on the tour.

“Rock ‘n’ roll is a nuclear blast of reality in a mundane world where no-one is allowed to be magnificent.” The former manager of The Runaways said that. The mad bastard. And Johnny Harrison swore by it. He had to. Almost forty, fully paid up member of the rat race and bored sh*tless. He had to believe in something. Then something happened. Something magnificent. A once in a lifetime band dropped out of the sky and right into his lap. A band unaware of just how great they could be. A band that had no idea what was about to hit them. A band that needed someone to light the fuse. That someone was Johnny Harrison and the truth was he needed them so much more. They were his ticket out. That’s how it is with THE ROCK ‘N’ THE ROLL. ‘N’ THAT. Buy your ticket and take the ride.

HOW THE BOOK CAME TO BE – by Steven J. Gill

I’d always held the ambition and belief that I could write a book but had previously not had the impetus or motivation.

In 2012, I attended the inaugural Festival No. 6 in North Wales –  a music and literary festival held in the magical grounds of Portmerion.

Upon spending an enjoyable afternoon listening to various writers, I had what is best described as an epiphany and decided there and then that I would set to and write my book.

I’d had a loose idea kicking around and having read a book that used the music industry as it’s backdrop – but to disappointing effect in my opinion- dusted down my laptop and embarked on my writing path.

Some years earlier, I’d managed a couple of bands with ultimately no great success but had an absolute blast doing it.

I liked the idea of transplanting a middle aged man into the music business and watching him sink or swim.

The idea would show up his vanity and insecurities and take them down a very unpredictable route rather than settle for an orthodox  more conventional life path.

I’ve loved it so far as the writing process was always something to immerse myself in. Editing can feel akin to homework on occasions but is a necessary evil.

Can’t wait to see where it all ends up…

Thank you, Steven. It sounds fab! Steven J. Gill is from Manchester, living just south of the city centre.

This is his first book. Previously, his writing work was limited to music and football fanzines.

He has had quite the varied career, ranging from finance, delivering enterprise days to schools, undertaker and. driver.

Very much in right time and right place in the early 80’s and 90’s and duly devoured all that the Manchester music scene had to offer. Talked a lot of nonsense and managed  a couple of bands that never unite made it big. Sings like a donkey braying into a bucket but a very good musical ear would be a fitting epitaph…

Having had somewhat of a literary epiphany at the inaugural Festival No.6 in North Wales, Steven decided it was time to set to and get writing. ‘The Rock ‘n’ The Roll. ‘ N” That…’  is the fruit of these labours.”

As some Scouse pop genius once opined, “it took me years to write, so won’t you take a look…”