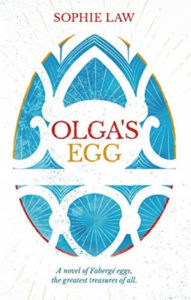 I’m so pleased to be posting today as part of the blog tour for Olga’s Egg, a very intriguing sounding book by Sophie Law. My thanks to Faye Rogers for the place on the tour.

When Fabergé specialist Assia Wynfield learns of the discovery of a long-lost Fabergé egg made for the Grand Duchess Olga Nikolaevna, daughter of the last Tsar of Russia, she appears to be the only person with misgivings. On travelling to St. Petersburg to see the egg, Assia moves among Russia’s new rich but finds herself pulled back into a family past she would rather forget. With news that a friend is missing, Assia starts to dig deeper. But does she really want the answers to the questions she is asking? Set in today’s glamorous world of Russian art with glimpses into the lives of the last Romanovs as their empire crumbled in the wake of the Russian Revolution, Olga’s Egg is an enthralling tale of love, family secrets and the artistic treasures that conceal them.

Fave Five things about being an author by Sophie Law

Plotting I spent a long time plotting Olga’s Egg and even drew up a huge and intricate plan which was very Blue Peter and involved cutting and glue and rulers. In actuality, it was more like a map and I was a cartographer, putting this new world on paper.

Researching I loved researching every aspect of the lives of the last Russian Grand Duchesses (the ‘Olga’ of the book’s title is Grand Duchess Olga, daughter of the last Tsar of Russia) and delving into the world of their gilded cage in Imperial Russia. My research into the missing Fabergé eggs was also endlessly fascinating – some of these lost eggs have no more than a spare description which means that we don’t really know what they look like, other than that they are egg-shaped. As you can guess, my imagination ran riot!

Being inspired I was reading through some of my notebooks recently and smiled at the passages which I had underlined and the notes which had been scribbled hurriedly in the margins. I could be walking along and stop suddenly (much to the annoyance of my husband and daughter) to write something in my book. You have to write something down when it comes to you because it can so easily disappear and get forgotten in the tedious minutiae of life.

Inspiring my daughter I have dedicated Olga’s Egg to my 4-year-old daughter, Henrietta, and when I showed her the dedication, she was thrilled. Reading with her is my favourite activity and I hope that she will write herself one day. My mother is a novelist and there is something very rewarding about passing a baton down through the generations.

Escaping Writing is endlessly rewarding for someone who spends a lot of time living different lives in their head. I found the hours would fly by when I was writing and that I could spend quite substantial periods of time just looking into space, but thinking…thinking.

Thanks so much, Sophie. It sounds like you really enjoyed writing this book. Sophie Law was born in London in 1981 and studied at Oxford University and the School of Slavonic and East European Studies. She began her career as a Russian art expert at Bonhams in 2006. After a number of years heading the Russian department and as a UK Board Director at Bonhams, she now acts as a consultant specialist. She lives with her husband and daughter in Oxford.