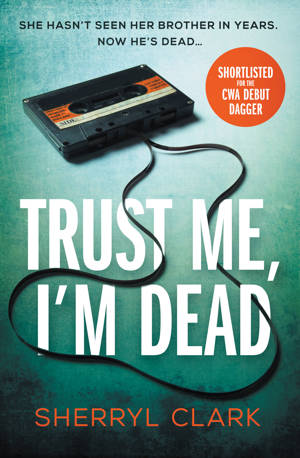 I’m delighted to welcome Sherryl Clark to Short Book and Scribes today as part of the blog tour for Trust Me, I’m Dead (what a title!). Sherryl has very kindly written a guest post for me to share with you all about researching a novel. My thanks to Clare Quinlivan from Verve Books for asking me to be a part of the tour.

She hasn’t seen her brother for years. Now, he’s dead.

When Judi Westerholme finds out her estranged brother has been murdered, she assumes it’s connected to his long term drug addiction. Returning home, she is shocked to discover he had been clean for years, had a wife – now missing – and a child, and led a respectable life. But if he had turned his life around, why was he killed in a drug deal shooting? And where is his wife?

Desperate to know what really happened, Judi sets out to uncover the truth, even though it means confronting her own traumatic past. But she’s not the only one looking for answers…

Gritty and bold, Clark’s thriller explores the sacrifices people will make for their families, with a gutsy unapologetic protagonist who will appeal to fans of Steph Broadribb and
Fiona Barton.

RESEARCHING A NOVEL AND “BEING THERE” by Sherryl Clark

When you write something set in the present day, in your home town or city, you might feel you have no need of research. But today’s readers are drawn to stories with details and descriptions that feel authentic and that can be visualized – it’s part of the way our culture has become so much more visual. While I’ve written a number of historical novels now, and honed my research skills through trial and error, I’ve also come to realize that even my contemporary stories improve with realistic depictions of places and objects, as well as character experiences.

Over the years, I’ve watched professional ballet classes, had a horse riding lesson, been on an old wooden sailing ship, visited many museums and taken dozens of photographs, as well as travelled to places that have appeared in my stories. I had an archery lesson to understand and depict how it feels to use a bow and arrow. All the YouTube videos in the world couldn’t do that for me!

For my crime novel, Trust Me, I’m Dead, I started with the Victorian Institute of Forensic Medicine – when I first wrote the novel I had been to a day at the VIFM where we learned what they did, and how investigations are carried out. I’ve now followed that up a few years later by interviewing a doctor who works there, and then undertaking a certificate course in crime scene investigation and forensic pathology.

I’ve also driven around the suburbs the novel takes place in. When I wrote the first draft, the locations were pretty rundown and grotty – now, a few years later, one has become a new apartment development area and another has new factories instead of derelict warehouses – rewriting was needed!

There are plenty of specialized resources as well. For example, here’s an interview with an FBI agent about gangs and La Cosa Nostra in today’s world: http://www.thebigthrill.org/2012/12/special-to-the-big-thrill-interview-with-fbi-agent-michael-plichta-by-kimberly-howe/

When I was a teenager, I learned an awful lot of British history from reading Mary Renault, Jean Plaidy, Victoria Holt and Catherine Gaskin. I also learned about shipping dynasties and Cornwall mining from Winston Graham. I started reading fantasy based on the Arthurian story when I discovered Mary Stewart, and who wasn’t introduced to dragons via Anne McCaffrey? Of course, my passion for crime writing started early too. I had a teacher at high school who offloaded her old books onto me (thanks forever, Kay) and my early reading included Mickey Spillane, Ed McBain and Raymond Chandler.

These days, we are often expected to read nonfiction if we want “reliable” information, yet I know many fiction writers who research their material just as deeply as nonfiction writers do. William Dietrich (and others) write amazing historical novels about Attilla the Hun.  I’ve read a “shopping mall” crime novel by Barry Maitland – Silvermeadow. It told me a huge amount about modern shopping centres or malls, how and why they are constructed (leading to demise of the high street shops) and the theory behind them.

Being a crime novel, of course there is a murder and a body found in the rubbish compactor at the back of the centre, but the information in there about how huge shopping centres are designed to be like little cities, with everything planned to lull people into a sense of well-being so that they give in to impulse buying … well, it sure made me think twice about what I do when I go into one! This is the kind of thing that fiction does so well. By creating characters you care about, you also become interested in the information they discover along the way.

As writers, we have to avoid info dumps and shovelling in huge dollops of the factual material we slaved so hard to discover in order to make our stories “real”. But by giving the info through the character, having a character who needs to find out this stuff, it makes the job easier.

What a fabulous post, thank you Sherryl. It sounds like you have had lots of fun experiences in the course of your research. Sherryl Clark has had 40 children’s and YA books published in Australia, and several in the US and UK, plus collections of poetry and four verse novels. She has taught writing at Holmesglen TAFE and Victoria University. She recently completed a Master of Fine Arts program at Hamline University, Minnesota, and is now studying for a PhD in creative writing.