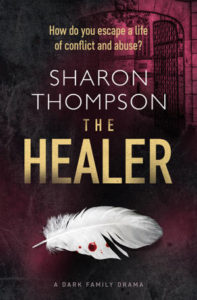 I’m taking part in the blog tour for The Healer by Sharon Thompson, with a fabulous guest post by Sharon about where her idea for the book came from. Thank you Emma Welton and Bloodhound Books for the place on the tour.

How do you escape a life of conflict and abuse?

Being a young girl in 1940’s Ireland isn’t easy for Molly, especially since she isn’t like others. Her family and community are wary of the beautiful child.

As Molly becomes a teenager life gets harder and she loses faith in everything.

Molly is surrounded in danger. She must make choices. But will she chose the right path or is she doomed to a life of misery? Will she survive in a world of violence and crime? Will The Healer ever be healed?

Amazon Link to The Healer

The Healer – Where did the idea come from? by Sharon Thompson

‘The Healer’ developed from an initial idea of – What if a child could see her guardian angels and had healing hands? What might others think of her? What crimes might she live through in the 1940s in Ireland?

As my debut novel ‘The Abandoned’ had a character people asked about, I was thrilled when this child told me that her name was Molly McCarthy. Molly was back! My readers would meet Molly again.

I was also delighted that there was good interest in Molly and her world. Bloodhound Books offered to publish her as ‘The Healer’. Despite Molly being an unusual protagonist for a crime novel (she sees angels remember) Bloodhound believe in her! For lovers of dark, crime fiction don’t fret, there are crimes. Yes, quite a few horrific ones are found throughout the novel.

The opening chapter starts with Molly as an eight year old child in 1940s Ireland.

Being a young girl isn’t easy for Molly, especially since she isn’t like others. Her family and community are wary of the beautiful child. As Molly becomes a teenager life gets harder and she loses faith in everything. Molly is surrounded in danger. She must make choices. But will she chose the right path or is she doomed to a life of misery? Will she survive in a world of violence and crime? Will The Healer ever be healed?

Molly brought me on a roller-coaster of emotions, I hope it is the same for the reader. The process of writing her was a complete joy though. She flowed out and I have a great love for Molly and as she’s a solid friend, I worry about her journey into the world. I shouldn’t. Molly is resilient and she knows what she is doing.

Molly popped up to be a source of affectionate for Peggy the main character in my first novel, ‘The Abandoned’. But of course she became a large presence herself. I hope that Molly’s character introduces hard-hitting themes about life, death and the plight of women. Disability, childbirth, pregnancy and the lack of birth control all affected the lives of women then. Times have changed, but in many ways, they haven’t. Women and children are still abandoned to poverty, criminality and abuse. Some of the same themes would be relevant today. Molly’s story made me cry as I wrote it. Many parts of it in edits and proof-reads made me shed a tear again. However, I do smile at her too.

Other things she made me think on were; Do we all have guardian angels? Are there guiding lights in our lives? Is there really such a thing as ‘healers’? What is murder exactly and what is helping someone to die? Can we survive the dark times and heal? What makes us good people? Unconditional love; is it a learned behaviour? Or is it a natural process no matter what we endure?

There are more, but they were not planned, Molly brought me to them. We all try hard to deal with the cards we are dealt in life and Molly is dealt very difficult ones.

I found too that houses and rooms became important to the story. Molly believes that walls can harbour good and evil and she feels it comes from the walls. Violet Cottage, 34 MountJoy Square and 340 Cricklewood (and other buildings) all have a personality for her and therefore for us all….I hope. Like society the buildings constrict Molly’s movements and life. Another question pops up, ‘what is home?’

Music and singing have a large influence on Molly. As the story unfolds so does the music. Light comes flickering through the dark times and we see a glimmer of hope only for it to be dashed. Molly has learning difficulties but her gifts manifest themselves in her healing abilities. Her beauty attracts both good and evil into her life. Her relationships with people are strained due to her disabilities and trauma, and although she is an underdog in ways, in others, she has a strength that surprises.

Thank you so much, Sharon. Molly sounds like quite a character and I’m quite interested in the idea of guardian angels myself.