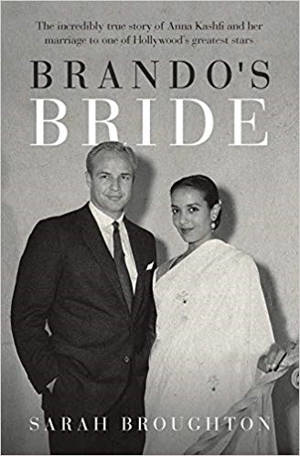 I’m delighted to be sharing a fascinating guest post today by Sarah Broughton, author of Brando’s Bride. My thanks to Anne Cater of Random Things Tours for the place on the tour.

In October 1957 Marlon Brando married a young studio actress called Anna Kashfi. He was thirty-three and at the pinnacle of his beautiful fame having recently won an Oscar for On the Waterfront. The wedding was front-page news around the world. His new bride was twenty-three, claimed to be an Indian princess and was pregnant. The day after the wedding a factory worker living in Wales, William O’Callaghan, revealed that Brando’s bride was in fact his daughter, Joan O’Callaghan and had been a butcher’s assistant from Cardiff. This book sets out to discover who was telling the truth and who was lying – and, perhaps more importantly, why?

Forget ‘Love Island’: How Marlon Brando’s first wife, Anna Kashfi, may have been the first victim of public shaming in post-war British tabloids – by Sarah Broughton

One of the most startling aspects of researching the life and times of Anna Kashfi for my book, Brando’s Bride, was the discovery of the batch of headlines which followed Kashfi’s marriage to Marlon Brando in October 1957. Up until that point she was a relatively unknown Hollywood starlet, having made just three films – albeit with ‘A listers’ like Rock Hudson and Spencer Tracy.  And although the gossip columns had duly noted an occasional date with Brando their two year relationship (including a year-long engagement) had remained largely under the radar. In fact, so invisible was Anna Kashfi that when The Times printed that Brando had married they referred to his new wife simply as ‘Indian’! Yet within hours this moderately interesting news item became a front-page sensation igniting headlines around the world.

In the eye of this storm was a young woman (twenty-three-years-old and pregnant – although that information was not public at the time), an immigrant in a strange land for the second time in ten years. Yet for a voracious press pack, eager for any information about the famously publicity-hating Brando, she was fair game. And so, when a ‘factory worker’ from Cardiff named William O’Callaghan declared that Brando’s ‘Indian’ bride was his daughter and, better still, that she had worked in a butcher’s shop – the prospect that the legendarily cool Brando might have mistaken a Welsh shop assistant for an Indian film star was irresistible.  Headlines like Britisher Says Brando’s Bride Ex-Butcher Girl and Brando’s Bride Welsh or Injun? (that really was the spelling in a Washington newspaper!) soon replaced the terse marriage announcements.

How did Kashfi react? How could she? Two years into her seven year contract with MGM, the mightiest of the mighty Hollywood Studios, she was embedded in the ‘star system’ – the means by which the all-powerful studios exploited the financial worth of each and every actor they employed. In order to work in the film industry in Los Angeles during the golden age you had to submit to the sometimes peculiar, and sometimes sinister, methods by which they controlled and corralled the large, occasionally mutinous, group of people upon whom their fortunes depended. Compliance was everything. And so anything could be altered in order to transform, say, a butcher’s assistant from South Wales into an Indian film star. In Kashfi’s case, however, there wasn’t a lot to do. No hairline-lifting or plastic surgery for her. Just the fairly ubiquitous name change and an enhanced studio biography to match the ‘exotic’ persona created for the ‘Grace Kelly of India’. So Joan O’Callaghan became Anna Kashfi and her railway inspector / factory-worker father became a world-renowned architect. Personality-wise she was demure (“Men’s superiority is a fact every Indian girl subtly learns and accepts from childhood”) but also, as a nod to American fans, loved ‘boogie-woogie jazz’. The fact that her skin-colour suggested her background was not that of a white European, the very detail which enabled the studio to market her as ‘exotic’ in the first place, was lost in an explosion of headlines which demanded to know whether she was Welsh or Irish (on account of the O’Callaghan name). Within a few days, however, ‘Mrs. Brando’s Brogue Is Showing, ‘Tis Said’ stories were replaced by ‘Brando’s All-Indian Bride Explains Her Irish Name’. This was because Kashfi, while still on her honeymoon, released a statement through MGM studios asserting that her parents were an unmarried Indian couple called Selma Ghose and Devi Kashfi and that William O’Callaghan was her step-father. Ghose and Kashfi were the names on the wedding license which she had signed upon marrying Brando. Devi Kashfi was the fictional dad referred to in her studio biography while Selma Ghose ran an Indian scarf shop in Piccadilly Circus where Kashfi worked briefly before getting her first acting job. At no point could she have envisaged that her two worlds would collide but when they did she took (perhaps on the advice of the studio) the inexplicable decision to pretend that her imaginary parents were her real ones.

Brando’s bride’s statement opened the floodgates: soon after British newspapers located details of her birth (‘Certificate Disputes Mrs. Brando’s Story’) and identified that the O’Callaghan’s were indeed the parents of Joan O’Callaghan.  In subsequent interviews with the press Mr and Mrs O’Callaghan revealed more of their story; they were born and had married in London before moving to India so that William could take up a job on the railways. Their children, daughter Joan and son Bosco, were subsequently born there; the implication being that this was where the ‘confusion’ lay. Both the O’Callaghan’s repeatedly said they did not have a ‘not a drop of Indian blood’ in them. When MGM belatedly revealed that they were paying salary cheques to ‘Joan O’Callaghan’ Kashfi’s reputation was shredded. She was now a proven liar. Worse, perhaps, she was a daughter who had denied her parents. For the rest of her life she would be defined by this moment: ridiculed as a ‘Cardiff girl on the make’ pretending to be an Indian princess and reviled in numerous Brando biographies as a fake ‘houri’. A closer look, however, reveals occasional sly references by journalists to Mrs O’Callaghan’s ‘dark looks’ as if they knew things were not quite as clear cut as they appeared. And how could they be? The O’Callaghan family settled in a post-war Britain which was, to borrow a current phrase, a ‘hostile environment’ – their choices as to which identity they assumed were, ironically, as limited as their daughter’s. As for the young, vulnerable, woman who became Marlon Brando’s first wife, the consequences of the headlines which plagued the first month of her marriage were catastrophic and she spent the following fifty years paying a heavy price for being trapped between a rock and a hard place.

Brando’s Bride by Sarah Broughton is published by Parthian Books.

Thank you, Sarah. What a tangled web which I’m certain will make for the most interesting read. Sarah Broughton was born in London, lives in Cardiff and is the Creative Director of Martha Stone Productions.

She has written a novel, ‘Other Useful Numbers’, and a non-fiction book about the mysterious first wife of Marlon Brando, ‘Brando’s Bride’.

Both are published by Parthian Books.