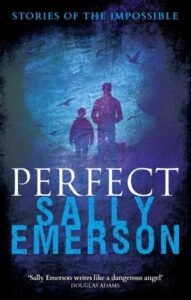 ShortBookandScribes #BlogTour #GuestPost by Sally Emerson, Author of Perfect, Stories of the Impossible

Today it’s my stop on the blog tour for Perfect, Stories of the Impossible by Sally Emerson which was published on 1st June by Quadrant Books in paperback and eBook. I have a guest post by the author to share today. My thanks to Grace Pilkington for the place on the tour and to Sally for the post.

In this wondrous collection of stories, bestselling author Sally Emerson introduces the eerie and supernatural into her keen-eyed portraits of everyday life. A clerk working in a public register office begins to receive death certificates dated in the future, but can she alter fate and save their victims? A woman unable to have children discovers a way of cloning her husband, but is their cloned son destined to repeat the mistakes of his father? A suburban mother is prescribed a health supplement with rather amorous side-effects; can she resist its sway and keep her hands off her neighbours? Emerson’s beguiling tales of quotidian life invaded by forces beyond our control are both uncanny and charming, and ultimately uplifting as she celebrates reality and unreality in its many forms. Fantastical, humorous and unfailingly honest in its depiction of humanity, Perfect will stay with the reader long after they leave the magic of its pages. Sally Emerson is the award-winning author of novels including Heat, Separation and Second Sight and an anthologist of poetry and prose. She lives in London.

‘So original and exquisitely drawn, Sally Emerson’s stories are full of gripping twists and astute insights into emotional dilemmas. They’re uncanny, and quite unlike anything else you’ll read.’ Jane Thynne

‘I’ve been reading the stories each night. They are really creepy and good – hard-edged suspense and pared down prose, like a feminist Roald Dahl.’ Amanda Craig

These strange stories of mine, ‘Perfect, Stories of the Impossible’, have been bubbling away deep in the recesses of my mind for some while. Sometimes I make a note of an idea or a plot but when I glance at it again in a few months time it seems dead. The words are just sitting there. But all these had been brewing, slowly, surely, over years and were very much alive. I hadn’t written them in any detail. I had notes about a clerk registering births and deaths who begins to receive death certificates dated in the future.  What I loved about it was the thriller element. This ordinary clerk, Susan, was racing against time to try to save the victims, in particular two young men, and will she end up with one of them? It’s a love story and a thriller and a story of the uncanny and of heroism, all jam-packed in a few thousand words.

In a short story you can’t waste words. I wanted each story to carry a punch, to have clarity and simplicity but also headlong pace, brio, suspense and a lot of reader-teasing. Readers should be holding their breath longing to hear the outcome of Susan’s attempts to cheat death.

For a long time I had had a feeling of a house where two lodgers, a boy and a girl, come and are in some kind of danger. The story ‘Fairy Tales’ is set in the house where I live now. Houses have often been almost characters in my fiction; ‘Heat’ was inspired by the unnerving house I used to live in in Washington DC. Am I the strange landlady in ‘Fairy Tales’? I don’t know. I do know the story had to emerge, and that on no account could anyone be allowed to guess its ending. These are riddling, often menacing, stories of love and sex and desire, and no one should be able to predict any of the endings.

One of my favourites is the title story ‘Perfect’ about a woman who wishes to clone her almost-perfect husband; but will the child be doomed to repeat the mistakes of the father? And is the father really as perfect as his wife believes?

It is heady stuff to create ordinary people and then inject a shot of the uncanny or nearly impossible into their lives and see what happens.

I tend to write at night when my brain works better and there are no distractions. I don’t quite see the point of mornings. My heart starts to beat faster when the tawdry daylight disappears and I am left in a pool of light in the darkness where I can stay as long as I like. Then the strangeness gathers around me, and the stories crawl out of their box and start to dance. Sally Emerson is the award-winning author of novels including Heat, Separation and Second Sight and an anthologist of poetry and prose. She is a Travel Writer for The Sunday Times and previously was editor of the literary magazine Books and Bookmen. She began her career there as an editorial assistant in a basement in London’s Victoria Street. At Oxford she edited Isis and continued her reviewing work and wrote for The Times. She won prizes including a Catherine Pakenham Award, the Vogue Talent Contest and the Radio Times Young Journalist of the Year. Her website is www.sallyemerson.com.